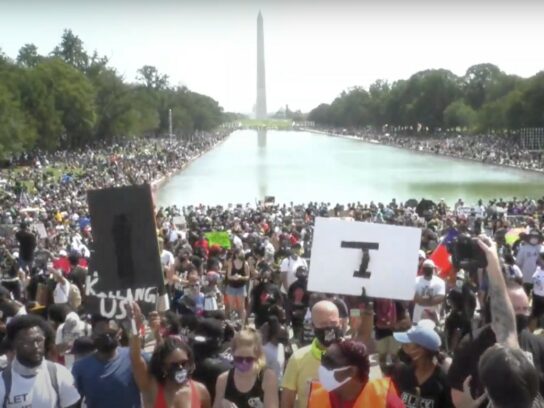 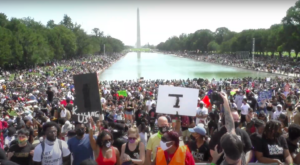 Protesters continuing to push for racial justice took to the National Mall Friday for the March on Washington.

Friday marked the 57th anniversary of a seminal moment in Civil Rights history.

On Aug. 28, 1963, Martin Luther King, Jr. led the march to demand civil rights for Black people. It was there he delivered his iconic “I Have a Dream” speech.

Protesters gathered at the Lincoln Memorial Friday morning, and the plan is to march to the Martin Luther King, Jr. Memorial, according to The Washington Post. Tweets from those at the rally show COVID-19 precautions in place like temperature checks and hand sanitizer.

Rev. Al Sharpton and Martin Luther King, III will speak at the rally, which is being called the “Get Your Knee Off Our Necks” march, a reference to George Floyd’s killing in Minneapolis in May. Floyd, a Black man, was killed by Police Officer Derek Chauvin, after Chauvin held his knee on Floyd’s neck for almost nine minutes. Floyd was accused of using a counterfeit $20 bill at a grocery store, which prompted the call to police. Witness footage of the incident went viral, sparking outrage among protestors who demanded justice for Floyd and other black Americans who have been victims of racism and police brutality.

The line to get into today’s “Get Your Knee Off Our Necks” Commitment March on Washington stretches way down Constitution Ave #MarchOnWashington @NBCNews pic.twitter.com/07DMpMkjA9

Good morning from the National Mall where the line for the March on Washington is a sight to behold. Mandatory temp checks mean thousands are being bottlenecked waiting to get in.

Folks are crowding onto the National Mall lawn to listen to speakers.

Good morning from the National Action Network’s “Get your knee off our necks” commitment march. Tens of thousands are expected to rally and march for justice and racial equality. pic.twitter.com/typzSfICdM

People are descending on the Lincoln Memorial and reflecting pool areas of the National Mall for the “Get Your Knee Off Our Necks” march organized by the @NationalAction Network.

The March coincides with the 57th anniversary of the historic March on Washington. pic.twitter.com/B8RvlR9DdC