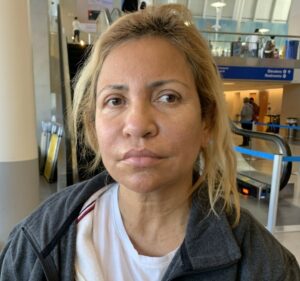 Police said a California woman was arrested for stealing nearly $14,000 from a Montgomery County resident through a lottery ticket scam.

In April of this year, MCPD officers responded to the 4000 block of Aspen Hill Road for a reported robbery that happened earlier.

According to police, an adult female victim was sitting in her parked vehicle in the 1900 block of Veirs Mill Road, when one suspect approached her and said he had a winning lottery ticket but did not want to claim it due to his “alleged illegal immigration status.”

Badillo, the second suspect, approached the victim and first suspect and offered to help. The suspects contacted a third suspect, who posed as a lottery company employee. The suspect told them they had to pay to claim the prize.

The victim agreed to claim the ticket for the suspects, police said, and she intended to get her money reimbursed and receive money from the winning ticket.

The first suspect contacted the suspect posing as a lottery company employee to inform him they had the money to claim the prize. The latter suspect told the victim she needed to provide three bills to confirm identity and show she was financially stable.

The victim drove home and went inside to get the documents, but when she came out the suspects had already left the scene with her money. Police said the suspects were driving a black Mitsubishi SUV.

Police said a description of the third suspect is currently unknown.

According to police, Detective M. Vendemio responded to the scene and lifted fingerprints from the victim’s vehicle. In July, a positive latent print hit from the law enforcement database identified Daisy Castillo Badillo as a suspect. The victim positively identified her from a photo as one of the people who scammed her. Vendemio determined Badillo’s address in California and got an arrest warrant charging her with theft by deception-related charges. The detective worked with LAPD to arrest her.

This Tuesday, she was extradited to the Montgomery County Central Processing Unit. On Wednesday, she was released on an unsecured personal bond, police said.

Detectives think there may be additional victims and urge any victims or anyone with information to contact the 4th District Patrol Investigations Unit at 240-773-5530 or contact Crime Solvers of Montgomery County at 1-866-411-TIPS (8477). Callers can be anonymous.