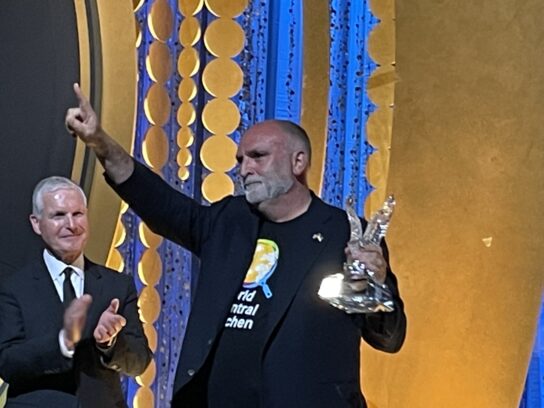 Chef and humanitarian José Andrés was honored with the Service to America Leadership Award Tuesday night at a ceremony held at The Anthem in Washington, D.C. The award honors an individual’s commitment to advocacy and public service. Andrés had just returned from two months in war-torn Ukraine. He and his team at the World Central Kitchen have served over 30 million meals there.

The celebration was presented by the the NAB Leadership Foundation. Music legend Patti LaBelle also received a Leadership Award for her extensive work in public service. Two longtime Montgomery County residents, CBS sportscaster James Brown and singer Maggie Rose, were presenters. Rose also sang the National Anthem to kick off the event. The show will be televised in the summer.

Chef and humanitarian @chefjoseandres, just back from two months in Ukraine and Poland, receives the leadership award at the Celebration of Service America Awards at the @TheAnthemDC Tuesday night. @mymcmedia pic.twitter.com/8AkyRoz5xq

More from the Service to America awards. Two of Montgomery County’s best: ⁦@JBsportscaster⁩ and @IAmMaggieRose⁩ who performed the anthem and was a presenter. Music legend Patti LaBelle and the man of the hour ⁦@chefjoseandres⁩. ⁦@WCKitchen⁩ ⁦@mymcmedia⁩ pic.twitter.com/xlUZsq5d2f

Andrés is highly acclaimed globally for his avant-garde cuisine served through his restaurant collective, ThinkFoodGroup. Twice honored in Time Magazine’s “100 Most Influential People” and a New York Times best-selling author, Andrés was awarded by President Barack Obama in 2015 the National Humanities Medal, which honors individuals or groups whose work has deepened the nation’s understanding of the humanities. In 2021 Andrés launched José Andrés Media, which will produce unscripted and scripted television series, books, podcasts, and digital content with a focus on stories about the power of food.

Through his non-profit, World Central Kitchen (WCK), Andrés leads humanitarian efforts to feed communities in need and reduce food insecurity during times of crisis. Andrés and his team have served fresh meals to those affected by man-made and natural disasters across six continents, including serving over 3.6 million meals to those affected in Puerto Rico by Hurricane Maria in 2017. 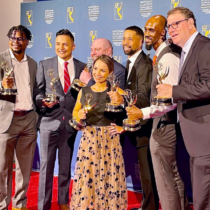