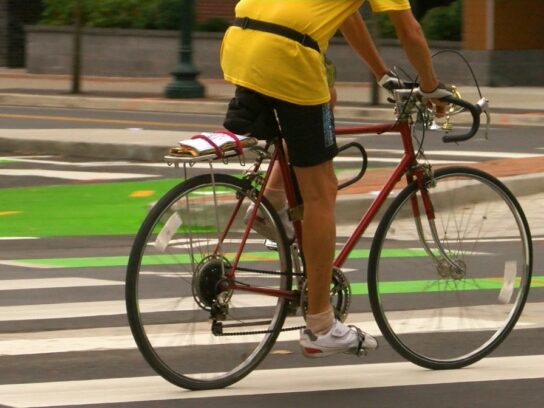 A bicyclist was struck Thursday morning at Cheshire Drive and Grosvenor Lane, marking the 154th bicyclists or pedestrian struck between January and to April 15. Four of them died.

During 2021, 480 pedestrians and bicyclists were struck and 10 were killed.

Those statistics do not include near misses or crashes on state highways, which are handled by the state police, according to Councilmember Evan Glass.

A little more than four years ago, Montgomery County’s initial Vision Zero plan went into effect. Vision Zero is the county’s plan to eliminate serious and fatal collisions on county roads for drivers, passengers, pedestrians and bicyclists by the end of 2030.

Wade Holland, Vision Zero coordinator, believes that goal is attainable. “Every death is preventable. Every death is unacceptable,” he said.

When collisions involving drivers and passengers are included, there were 39 fatalities during 2020 and 32 in 2021.

“This is an epidemic problem, and there needs to be a larger conversation about redesigning our roads and being sure drivers are paying attention,” Glass said.

“Too many people are getting hit, and too many people are dying,” he told My MCM. “The incidents we are seeing in Montgomery County, unfortunately are occurring throughout the D.C. region and across the county,” he said, adding, “We need an across the board solution that works for everybody.”

Glass hopes to ensure that federal dollars from the infrastructure bill are used to “rethink and redesign some of our major roadways.”

According to the Fiscal Year 2022-2023 Vision Zero plan, the county is installing pedestrian hybrid beacons, designing 10 bikeways areas and continuing construction on 11 and improving lighting and sidewalk upgrades throughout the county’s most dangerous roads.

Vision Zero listed the road corridors where accidents are most likely to occur. They include Middlebrook Road in Germantown, New Hampshire Avenue, Georgia Avenue and Veirs Mill Road.

To reach Vision Zero, “We need to use every tool in the toolbox,” said Holland.