Greenberg ruled that a 2012 U.S. Supreme Court decision did not apply to Malvo. The ruling made life without parole for juvenile defendants unconstitutional.

Malvo was one of the two D.C. snipers who was part of a shooting spree that killed 10 people in 2002.

“This court finds that defendant is not entitled to seek review of his sentence … as the sentence imposed was substantively and procedurally legal under the law of this state,” Greenberg wrote in his 20-page opinion.

Malvo, and his accomplice John Allen Muhammad, went on a shooting spree starting Oct. 2, 2002. After three weeks, 10 people were dead, including six in Montgomery County. Malvo, then 17, and Muhammad were captured sleeping in their car at a rest stop in Myersville.

Malvo and Muhammad were tried in Virginia in 2003. Muhammad received the death penalty.

Under Virginia law, Malvo received a mandatory sentence of life without parole. That sentence was overturned with the 2012 Supreme Court decision. In May, the case was sent back to Virginia judges for a new sentencing hearing.

Maryland tried Malvo and Muhammad in 2006. Each defendant was sentenced to life without parole. Virginia carried out its execution of Muhammad in 2009.

Maryland, however, does not have mandatory life without parole for juvenile offenders. Malvo pleaded guilty in the Maryland case. 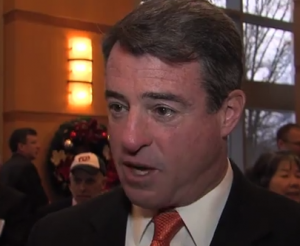 Doug Gansler, the state’s attorney when the snipers were prosecuted.

The ruling is a vindication of sorts for former State’s Attorney Douglas Gansler who sought to try the two in Montgomery County.

“We wanted to make sure the people responsible were held accountable,” Gansler said Wednesday. “People who commit crimes are prosecuted for the crimes they commit.”

Montgomery County, he said, was “the epicenter of the crimes.”

Critics believed the political ambitions of Gansler and former county executive Doug Duncan fueled the desire to retry the snipers in Rockville. Gansler shrugged it off.

“You’re always going to get flak from people who are ill-informed by the law,” he said.

The critics targeted the expense. Gansler insisted then, and still does now, that the expense was minimal. The prosecutors would have been paid anyway. Increased security was questioned. On Wednesday, Gansler called that a “make-believe issue.”

“You try serial murderers for the murders they committed,” he said.