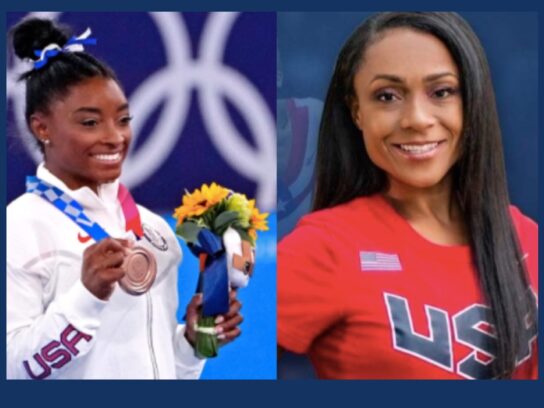 Three-time Olympian Dominique Dawes applauded Simone Biles on her recent performances in the Tokyo Olympics. Dawes said watching the event brought back memories – both good and bad. The former USA gymnast said she sympathizes with Biles and praises her bravery to bring light to mental health. Biles is a survivor of the Larry Nassar sexual abuse scandal that rocked the world of gymnastics.

Biles pulled out of the women’s team final last week – choosing to take a back seat and work on her mindfulness. The 24-year-old returned and earned a bronze medal in the women’s balance beam final competition on Tuesday.

“I went through a great deal of pressure throughout my career leading up to the 1996 Olympic Games having my mental breakdown behind the curtain. I didn’t have the choice but to get back up and get the job done. I love the fact that her inner voice is heard. Mine was muted,” said Dawes.

Dawes, who became the first-ever African American to win a gold medal in gymnastics at the 1996 Olympics, explains why she feels Biles is leaving a “lasting legacy beyond sports”.

the outpouring love & support I’ve received has made me realize I’m more than my accomplishments and gymnastics which I never truly believed before. 🤍