For Montgomery County residents, former Police Chief Charles Moose was their link to the Beltway Sniper shootings 20 years ago. Scared to go shopping, buy gas or send their children to school, residents eagerly anticipated his next news conference to see if life would ever return to normal.

Those news conferences in October 2022 concerning the shootings that left 10 dead were so frequent that the spot in Rockville where a large tent was set up for the media was dubbed The Moose Lodge.

In late October 2002 — soon after the arrests of John Allen Muhammad and Lee Boyd Malvo — Montgomery Community Media’s Kevin Jolly  sat down with Moose for his very first one on one interview since the beginning of the shooting spree.

Moose, who died Nov. 25, 2021, always appeared calm and in control, but he desperately wanted to find the killers and limit the deaths, recalled Greg Wims, founder and president of the Victims Rights Foundation. His group raised about $500,000 for the victims’ families.

Wims remembered those days when he was with Moose fairly often as they both visited victims’ families and sat through numerous court proceedings.,

“He had a tough exterior, but he had a very kind heart,” Wims said.

Each killing affected Moose greatly. Each time, Wims said, “A little piece of his heart was taken.”

The former police chief was “very happy” when Muhammad and Malvo were arrested, telling MyMCM in the first interview he did following their arrest, “I’m excited that there are football games tonight, soccer games. People are going to be out walking their dogs.”

Wims called Moose “a great leader, a great motivator of his team, not just Montgomery County” officials but also the federal law enforcement agents who helped solve the case. And the former chief personally met with most of the families who lost a loved one. “They talked. He had some private time.”

Moose stepped down from his role here in June 2003, less than a year after the sniper attacks. 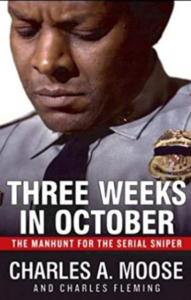 His book, “Three Weeks in October: The Manhunt for the Serial Sniper,” was published in September 2004. The book took “readers behind the headlines,” according to Amazon.

It was a New York Times bestseller but also a sore point for some in law enforcement who believed that the book’s debut so s00n after the killings would make it hard to fill a jury and potentially hurt the trial proceedings. The publishing of his book and his consulting on a movie about the investigation led to his resignation as the top law enforcement officer in the county.

Moose, who earned a PhD in urban studies and criminology, served as Squadron Commander of the 113th Security Forces Squadron of the D.C. Air National Guard. He served as military liaison and advisor to the New Orleans Police Department concerning Hurricane Katrina.

He then served as the 154th Security Forces Commander in Hawaii and became a member of the Honolulu Police Department. At that time, he told Hawaii News Now, “I hope to bring experience, inside perspective, help co-workers. Certainly, I’ll take away more than I can bring.”

He added, “I’m hopefully just going to work the street and do patrol for the Honolulu Police Department.”

Moose resigned from the Honolulu Police Department in May 2008 and moved to Florida. He lived there with his wife, Sandy, until his death last year on Thanksgiving Day, at the age of 68.