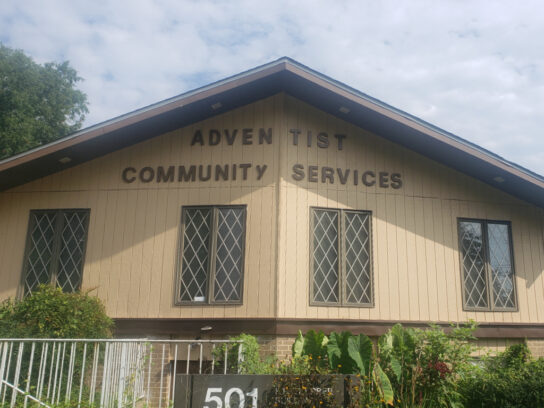 Mounds of dishes, pots and pans, toys, blankets and cleaning products piled high on the driveway and parking area of Adventist Community Services of Greater Washington await sorting by volunteers from all over the country

For the past two weeks, after a simple request on a neighborhood list serve, area residents and others from as far away as Michigan have driven to the building on Sligo Avenue with donations that soon will fill a home in the apartments of newly-arriving Afghanis.

This outpouring of caring began when Ken Flemmer, director of Adventist Community Services, read on a local neighborhood list serve that someone was seeking a place to donate goods to the Afghanis who are expected to come to this area. Since the non-profit already has a food bank, distributes 50,000 diapers monthly and collects clothing for those in need, Flemmer suggested that donations could be dropped off there.

“Someone on the list serve put it on Instagram, and it got 14,000 likes,” he said. Soon, he heard from two men who said they were driving from Michigan with a van full of donations. Howard University Medical Students offered to help sort and package the donations.

Flemmer expects there soon will be enough items to fill three semi-tractor trailers. For now, the items are going to a storage unit.

While Flemmer said his appeal was to help Afghanis, he expects some of the items will be used by those coming from south of the United States border. “They are coming. It’s more than a trickle,” he said, adding that many arrive in the area on Greyhound buses that stop in Silver Spring.

Flemmer has helped many resettle here, and he is optimistic that those fleeing Afghanistan will be successful. “The Afghanis that are coming are well-educated. There were translators and the like. They should be very employable.”

Saba Ali, a medical student at Virginia Commonwealth University, drove almost two hours to help Thursday. She saw it mentioned on line and asked her classmates if they had anything to donate. In a short time, the trunk and entire back seat of her car were filled.

Cissie Williams, who lives about a mile from Adventist Community Services, was volunteering for the second time on Thursday, “Because it’s something important that needs to be done. It helps people who are in immediate need.”

Afghanis who fled their country “have been through so much, to just be able to get them things they can start with, a toothbrush and toothpaste,” is helpful, she said as she wiped her brow in the 80-plus degree heat.