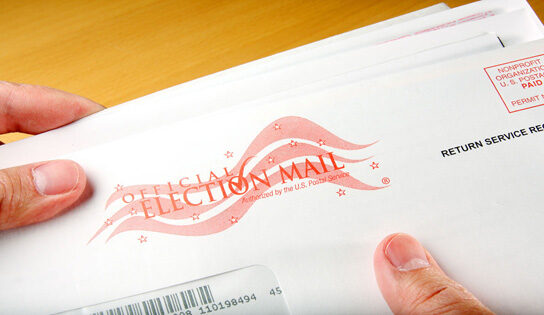 During a civil hearing at the Montgomery County Circuit court to discuss the Maryland State Board of Elections’ petition to start processing ballots early, the Republican nominee for Maryland governor, Dan Cox, proved to be the most vocal critic.

With mounting pressures that the primary election will be riddled with canvassing delays, implicating a long wait for general election results, the Board of Elections is seeking to obtain a judicial order to suspend an exclusive Maryland state law that prohibits ballot processing before two days after an election.

This request comes after counties received an overwhelmingly large number of mail-in ballots during the July primary election, according to Daniel Kobrin, assistant attorney general who represented the Board of Elections. Montgomery County, which had the longest delays, recorded receiving around 75,000 mail-in ballots that took 36 days to tabulate.

In court, Kobrin said the board expects a larger voter turnout for the general election, and indicated that the results could be delayed until around New Year’s Day if they can’t start processing early.

“The local boards of election responsible for counting the vast majority of mail-in ballots require more time for canvassing and tabulating these ballots or there is a substantial risk that they will not be able to meet critical deadlines established by law,” the petition filed in the Montgomery County Circuit Court states.

Cox’s lawyers, Ed Hartman and Matthew Wilson, argued in court before Montgomery County Circuit and County Administrative Judge James Bonifant on the basis of separation of powers, that election matters fall under the legislative branch and General Assembly, rather than the judicial branch.

Hartman additionally contended that the board lacks substantial reasoning to declare an emergency because they anticipate the influx of ballots for the coming election. Under the state constitution, he argued, an emergency that would justify an exception like the one requested by the state elections board must be “sudden, unexpected and unanticipated.”

Kobrin rebutted Cox’s lawyers claims, saying in court that the General Assembly did not have the power to call a special session to override a veto. In addition, he pointed out, election matters have been delegated to the judicial branch in the past. Finally, he emphasized that while mail-in voting has become more popular since the COVID-19 pandemic, the board never expected such a dramatic rise in the number of mail-in ballots, and that the request does constitute an emergency.

In early 2022, during this year’s legislative session, state lawmakers attempted to pass a bill that would have permanently removed the wait stipulation. Maryland Gov. Larry Hogan ultimately vetoed the bill in May, voicing concerns over the exclusion of “basic security measures such as signature verification.”

In an interview with MyMCM on Sept. 13, Montgomery County Executive Marc Elrich addressed Hogan’s veto that led to the ballot counting delays during the primary election. “Because of the decision the governor made, it really did delay the ability to count… hopefully they’re able to fix this before the general election,” he said.

Bonifant is expected to issue a ruling on Sept. 23. If the petition is approved, election officials will be permitted to begin processing mail-in ballots on Oct. 1.

To view our interview with Marc Elrich, visit: https://www.youtube.com/watch?v=L0_fYw2xHz4