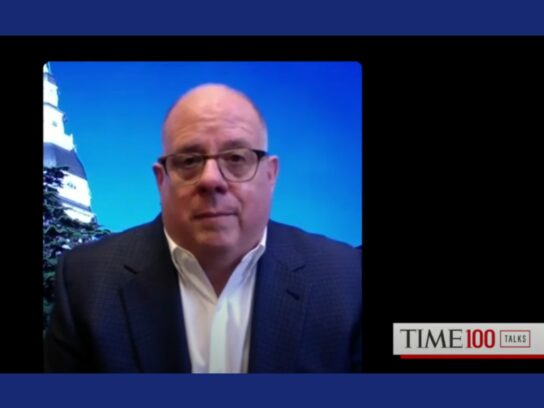 Governor Larry Hogan, during an interview for Time Magazine’s Time100 Talks on June 11, said that defunding the police was “a terrible idea.”

The statement was made after interviewer Katie Couric asked what he planned to do in response to national calls for the reallocating of police funds into community programs—one of the main reforms being called for by protesters in the wake of George Floyd’s death. Hogan, who has praised protesters and law enforcement in Baltimore for their combined efforts in keeping things peaceful, said that improvements are due to putting more money into the department, not less.

“In recruitment, in training, in equipment, try to teach people about deescalation. We’ve got a very diverse police department, it’s majority minority, and I think they’re better equipped, better trained…They spend a lot of time in the community working with folks, and I think it’s really helped,” he said. “The problems are not solved by any means…but there’s a little bit more trust and a little bit more communication, and spending more time listening to the concerns and trying to work together is what it’s really all about.”

Tune in today at 1 p.m. for my conversation with @KatieCouric and @TIME for #TIME100Talks. Register here: https://t.co/OgdgSSyCzU pic.twitter.com/XbvCQyhjjh

Hogan added that they’ve learned a lot from the protests that took place in 2015 after Freddie Gray was killed in police custody. The changes made since are what he says have enabled such positive demonstrations in recent weeks.

“We certainly have by no means solved all the problems of Baltimore, or in police departments across our state, but we have taken some really big steps and made some real progress,” said Hogan.

Hogan also agreed to the importance of putting money into the community, but said that both areas need to be funded rather than taking from one to build up the other.

“You’ve got to invest in those communities and give the people more opportunities, and you’ve got to help with some of the underlying socioeconomic problems, but eliminating or defunding police is not the way,” he said.

The entire interview can be viewed below:

Time’s Time100 Talks: Finding Hope is a virtual event bringing together leaders from different disciplines to discuss solutions to current problems being faced in the world.