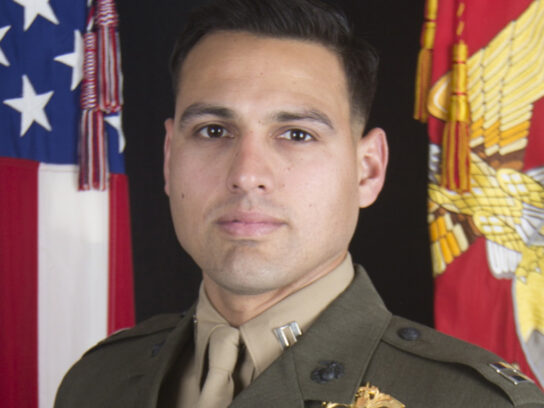 The two men were accompanying Iraqi Security Forces during a mission to eliminate an ISIS stronghold in the mountainous area of north central Iraq when they were killed, according to the U.S. Marine Corps.

He was married and had a daughter, three sons, his parents, and two brothers.

Navas enlisted in the Marine Corps in 2004, beginning as an administrative clerk assigned to barracks in Washington D.C.

He also had been an infantry officer. He spent the last four years assigned to the 2nd Marine Raider Battalion, where he served as a team commander and company executive officer, deploying in support of Operation Iraq Freedom and Operation Inherent Resolve before this current deployment in Iraq, according to the U.S. Marines Corp.

The 2nd Marine Raider Battalion is based in Camp Lejeune, North Carolina.

We are deeply saddened to learn of the passing of Capt. Moises A. Navas, a Special Operations officer from Germantown. A Purple Heart recipient, Captain Navas was one of our true heroes and perfectly embodied the mission of the United States Marine Corps.

In a tweet, Md. Gov. Larry Hogan said, “We are deeply saddened to learn of the passing of Capt. Moises. A. Navas.” He called him “one of our true heroes and perfectly embodied the mission of the United States Marine Corps.”

He called for the United States and Maryland flags to be lowered when Navas is buried.

“The Montgomery County Council is deeply saddened to learn of the deaths of U.S. Marines Capt. Moises A. Navas, 34, a resident of Germantown, Md. and Purple Heart recipient, and Gunnery Sgt. Diego D. Pongo, 34, who lost their lives during a mission to eliminate a stronghold of the terrorist organization ISIS in Iraq. We send our heartfelt condolences to the families of both Marines, and ask residents to keep them in their thoughts during this difficult time.”

Jonathan Hoffman, assistant to the U.S. Secretary of Defense for Public Affairs, also offered his condolences, stating, “We are privileged by these Marines’ service and ultimate sacrifice to the country.”

Marine Raider Regiment Commanding Officer Col. John Lynch called both Navas and Pongo “intelligent, courageous, and loyal. They were dedicated leaders, true professionals in their craft, and willing to go above and beyond for the mission and their team.”

He noted that Navas, who went by the name Mo, was born in Panama and grew up in Maryland.

Navas also was a scout sniper, a martial arts instructor, a combat diver and recently was selected to be promoted to major, according to Hoffman.