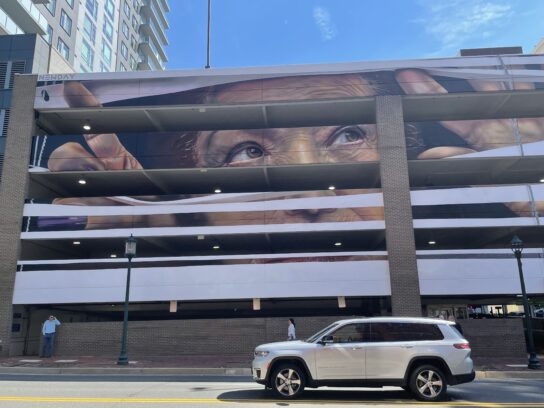 The Woodmont Corner public parking garage in Downtown Bethesda has a new look.

New Day, a mural on the Old Georgetown Road side of the garage, was unveiled Tuesday morning at a ceremony featuring local leaders and the artist himself, The Jah One, a Montgomery County resident.

New mural called New Day by local artist The Jah One unveiled at parking garage on Old Georgetown Road in Bethesda. This is part of the Paint the Town initiative that promotes more public art murals in downtown Bethesda. ⁦@mymcmedia⁩ pic.twitter.com/xPQjeHJYvR

Local artist The Jah One tells @mymcmedia the story behind New Day, the mural depicting his mother which was unveiled today at the Woodmont Corner parking garage in Bethesda. pic.twitter.com/isdzcUiqpp

The project was made possible by a partnership with the Montgomery County Department of Transportation, the Montgomery County Planning Department, the Bethesda Arts & Entertainment District and the Bethesda Urban Partnership. They put out a call for local artists to participate in the “Paint the Town” initiative to promote and bring more public art murals to Downtown Bethesda

Montgomery County Mark Elrich made the official announcement at an art gallery adjacent to the garage.

The Jah One, who started painting murals five years ago, has also designed murals in Washington, D.C., Chicago, Minneapolis, Detroit, Atlanta, and Miami.

New Day depicts the artist’s mother peaking out window blinds. It’s a way, according to the artist, of celebrating her and everything she has done and sacrificed for their family. According to Jah One, “Too often we honor people when they aren’t around to hear it. In a more relatable way, New Day, is about us coming out of a long historical pandemic. We lost a lot and much has changed forever. Hopefully, we spent our time in isolation thinking about what’s truly important to us and now we are focuses on those things with a new, more grateful perspective on the future.”

This is the second mural project Montgomery County Department of Transportation (MCDOT) has undertaken to enhance the vibrancy of highly visible County spaces. The other is outside of MCDOT’s Woodmont-Rugby Public Parking garage located at 8216 Woodmont Avenue. 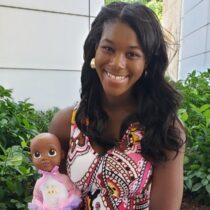