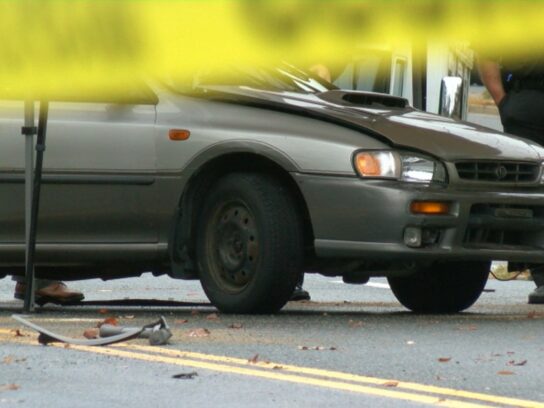 Update, 3:15 p.m.: In a statement issued at 3:15 p.m., Montgomery County police say the Suburu, a 1999 Impreza SW, was reported stolen. The statement also says the injured male in the Subaru’s backseat was a juvenile and suffered only injuries from the collision. He was not shot.

“The initial assessment by Montgomery County Fire and Rescue Service indicated that the male’s injuries could have been the result of a shooting. After a medical examination at a local hospital, it was determined that all injuries were as a result of the traffic collision,” the statement read.

This remains an active and ongoing investigation. Detectives urge anyone with information to call the Central Auto Theft Section at 240-773-6370. Those who wish to remain anonymous may call Crime Solvers of Montgomery County toll-free at 1-866-411-TIPS (8477) or enter a tip online. Crime Solvers will pay a cash reward of up to $10,000 for information provided to them that leads to an arrest for this crime.

Update, 3 p.m.: As Montgomery County police were investigating a two-car collision in Silver Spring, they found what officers believe to be a gunshot victim in the back seat.

MyMCMedia’s Doug Tallman provided updates about the incident on his Twitter account. Tallman tweeted that the incident started after a Subaru collided with a Honda Pilot this morning at around 7:18 a.m.

Two men in the Subaru exited the vehicle and fled the scene, Tallman tweeted. Police found a potential shooting victim in the back of the Subaru.

Police told reporters the driver and passengers in the Honda Pilot were only involved in the wreck and they were taken to the hospital for precautionary measures.

At scene of wreck and suspected shooting near the Silver Spring International School pic.twitter.com/0mB9REzsdJ

Pilot driver, passengers uninvolved other than the wreck. They were taken to hospital as precautionary measure.

This story is ongoing.

Montgomery County Police Department tweeted Thursday morning that a person was shot in Silver Spring in the 300 block of Wayne Avenue.

Police said first responders were dispatched to the scene at 7:18 a.m. for reports of a collision. MCPD tweeted that when officers arrived at the scene two people fled from a vehicle, but they were able to locate an additional person in the vehicle, who appears to be the victim of a shooting.

Police say the person was taken to a local hospital. There are traffic delays in the area as detectives investigate the scene.

Update to Wayne Ave Incident (part 1 of 3): at approx. 7:18am, MCP responded to report of collision in 300 blk of Wayne Ave, Silver Spring. 2 people fled from veh. Ofcs located add'l person in veh, blvd to be juvenile male, who appears to be victim of a shooting. (CONT)

Update to Wayne Ave Incident (2 of 3): Shooting victim was transported to local hospital. Investigation is ongoing. Additional information will be provided as it is confirmed (CONT).

Update to Wayne Ave Incident (3 of 3): Public Information Officer en route to scene. Will provide media staging area location once it has been confirmed.

Police are meeting with members of the media in the area of Wayne Avenue and Dale Drive to offer more information.

This story will be updated once new information is available.

By Deirdre Byrne and Doug Tallman