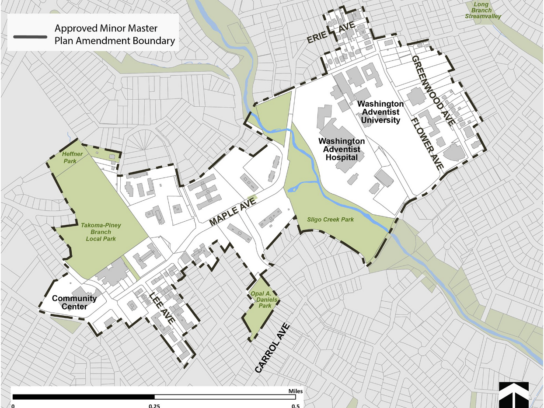 The Takoma Park City Council Wednesday heard an update on community engagement with the city’s Minor Master Plan Amendment – which will guide growth near the previous site of Washington Adventist Hospital and along Maple Avenue.

The site boundaries for the city’s Minor Master Plan Amendment focus on the Washington Adventist Hospital and University campuses, the Erie Center and the area along Maple Avenue. The collaboration between the city and Montgomery Planning to amend the 2000 Takoma Park Master Plan resulted from stagnant development in the project area since Washington Adventist Hospital relocated to White Oak in 2019.

Dozens of residents voiced concerns about the closure of Washington Adventist Hospital and the lack of nearby medical care in the planning team’s first year of outreach, which started in September 2021. Many emphasized that the redeveloped project area could be the site of a new urgent care facility or health clinic, Montgomery Planning Senior Planner Lauren Stam told the Takoma Park City Council.

Access to affordable housing and the need for a walkable grocery store were also major priorities echoed by Takoma Park residents and students surveyed, Stam said.

University students emphasized that facilities on campus needed crucial updates. The campus could also have more community spaces, such as restaurants, bars and outdoor areas, they added.

Residents’ main priorities for the project area included mixed-use development and housing complexes. Some community members also proposed the site as a location for a new high school, amid concerns of overcrowding at Montgomery Blair High School.

The council last heard an update from Montgomery Planning on the Minor Master Plan Amendment process in March. Over the last year, the planning team evaluated existing conditions, historical and cultural resources and preliminary priorities for the plan site’s boundaries.

Now at the halfway point in the amendment’s two-year implementation timeline, Montgomery Planning has entered the “visioning phase” for the Minor Master Plan Amendment. This fall, project managers will take the priorities outlined in their first round of community outreach, revise them and narrow them down to create key recommendations, said project lead Melissa Williams.

Continued community input on the plan will shape the development of pedestrian infrastructure, parks, open spaces and facility improvements near the site boundaries.

The team will also host an in-person open house on Oct. 18 for residents to provide ideas and comments related to the Minor Master Plan Amendment. The open house will be at Piney Branch Elementary from 7 to 9 p.m.

“Residents want to be heard and make sure that they give input, and whatever comes out of this final document, they can say that they were a part of it,” Smith said.

Once the visioning phase of the plan wraps up this winter, project planners will complete a full draft of the amendment and present it to stakeholders this spring. The project is set to be completed in September 2023.