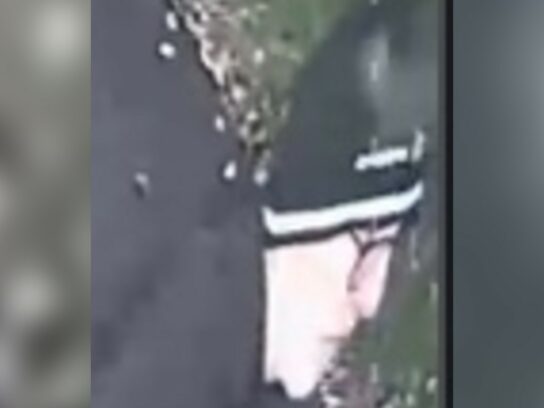 The Montgomery County Police Department (MCPD) is searching for a man who police said has twice spray-painted derogatory words on the garage door of an Olney residence.

Investigators have released surveillance video of the suspect and are asking for the public’s help in identifying him.

The suspect appears to be wearing dark clothing, glasses and a beanie hat.

The vandalism incidents occurred on two separate dates at the same home in the 17000 block of Cashell Road in Olney, MCPD said.

On Oct. 28,  the suspect spray-painted derogatory wording on the garage door of the home during the night, the homeowner reported to the police. On Nov. 13, at approximately 1:39 a.m., a home surveillance video captured a man spray-painting another derogatory comment on the victim’s garage door. MCPD said the vandal was last seen walking toward Cherry Valley Court.

MyMCMedia reached out to MCPD to inquire about the man’s possible motives and is awaiting a response.

Detectives are asking anyone with information about the suspect or these vandalisms to contact the 4th District Investigative Section at 240-773-5545.  Residents who want to stay anonymous can reach the Crime Solvers by phone: 1-866-411-TIPS (8477), online, or via the Crime Solvers app.  Crime Solvers offers up to $10,000 in cash for information provided to them that leads to an arrest in this case.