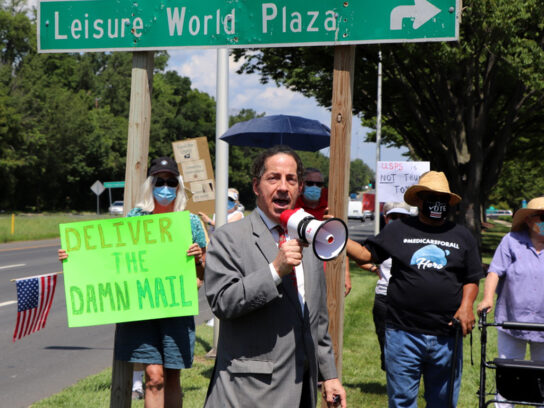 A group of Leisure World residents rallied in support of protecting the post office from political dismantling Tuesday afternoon.

Come November, many around the country will be voting by mail because of the coronavirus. As of Monday, more than than 90,000 Montgomery County residents applied for vote-by-mail ballots.

However, over the last several weeks, USPS has become politically divisive because President Donald Trump — who reportedly requested his Florida vote-by-mail ballot over the weekend — has pushed unproven claims about mail-in-voting having potential for largescale fraudulent voting. Trump has publically expressed opposition to the Democrats’ proposed funding boost for USPS ahead of the 2020 Presidential Election.

Raskin’s rally at Leisure World comes days before the U.S. House of Representatives will break from its August recess on Saturday to consider legislative action against the policy changes made by Postmaster General Louis DeJoy, which they say have caused delays in the mail.

“It’s an extraordinary thing, my friends, that in 2020 we have to rise to the defense of the post office against the government itself,” Raskin said.

Raskin was joined by residents who shared stories about their prescriptions being delayed. He was also joined by Nannette Corley, the president of the American Postal Workers Union’s Local 3630 chapter. Corley talked about three Montgomery County post offices that have dismantled mail sorting machines, which have caused a delay in mail deliveries.

Democrats around the country participated in rallies such as these, at the urging of U.S. House Speaker Nancy Pelosi (D-Calif). Pelosi said in a letter to Democratic colleagues Sunday, “Postmaster General Louis DeJoy, one of the top Trump mega-donors, has proven a complicit crony as he continues to push forward sweeping new operational changes that degrade postal service, delay the mail, and – according to the Postal Service itself – threaten to deny the ability of eligible Americans to cast their votes through the mail in the upcoming elections in a timely fashion.”

Following the Leisure World rally, several news outlets reported that USPS is halting “its controversial cost-cutting initiatives until after the election.” DeJoy is scheduled to testify before Homeland Security and Governmental Affairs Committee Friday. He will also appear before the House Oversight and Reform Committee Monday.

Here’s a look at the full news conference from the U.S. Postal Service Day of Action rally at Leisure World.