Johnson Park in Gaithersburg, once the heart of Black baseball in Montgomery, will be restored, it was announced June 12 at the First Annual Clarence “Pint” Isreal Juneteenth Classic at the Shirley Povich Field.

Pint Isreal was a Negro League baseball player who lived part of his life in Rockville. He recently was selected posthumously by the Montgomery County Sports Hall of Fame as a member of the 2022 Class of inductees.

The premier field for the county’s Black sandlot teams was Johnson’s Park in Emory Grove which had lights, allowing for night games. Residents would gather there throughout the summer for food, fellowship, religious services and baseball.

Milt Thompson, who played professional baseball for several teams, grew up in the area and loved watching the games. “It’s very special. I was a little kid, and I still remember these guys playing down at Johnson Park. It was one of the highlights of my life. It was unbelievable,” he told MyMCM. 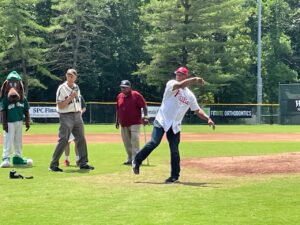 Thompson, who was the hitting coach of the 2008 World Champion Philadelphia Phillies, added, “I learned how to play the game and respect the game” while watching the players from the Negro League who weren’t in it for the money.

In the county’s newly-adopted capital budget, funding was allocated to renovate the field and recognize and honor the legacy of the sandlot league in Montgomery County.

“I am thrilled by the chance to make Johnson’s Park a premier baseball field once again,” said Councilmember Hans Riemer in a news release. “As a baseball dad and coach, I hope to see this field become a renowned place for competitive youth baseball, where players will not only play on the same ground as some of the County’s greats, but see murals and storyboards showcasing that unique history and come away with a deeper understanding of the community they live in and the game they love.”

Johnson’s Local Park is an 11-acre park located in the Washington Grove area that was known as Emory Grove Park until 1996 when the name “Johnson’s Local Park” was reinstated to reflect its history. Built in 1947 by Black business entrepreneur Edward Johnson, Johnson’s Park hosted Negro League teams that took on Montgomery County’s top sandlot teams including the Rockville American Legion Post 151, Maryland Wildcats and the Sandy Spring All-Stars.

Former Scotland Eagles third baseman Eddie Dove once said, “When you played at night at Johnson’s Park, you felt like a pro.”

But as opportunities for Black players expanded in the 1960’s and early 70’s, the Black sandlot baseball teams disappeared.

The park will be renovated and include a new playground geared for children from ages two to 12.

In 1974, the park was acquired by Maryland-National Capital Park and Planning, which the goal of making it one of the first parks highlighted as part of Untold Stories Initiative, according to Mike Riley, county parks director.

“Johnson’s Park was an important anchor in the Black community, a gathering place for people from around the county,” said Montgomery History Director Matt Logan. “Its significance extended far beyond the baseball games that were played. We are thrilled to see the park reestablished and brought back to life as a place rich in local history where people can connect with one another again.”