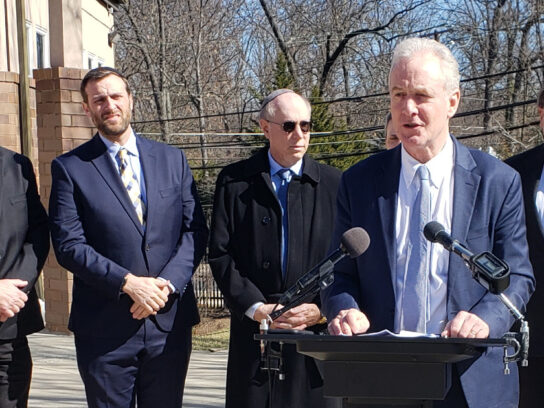 U.S. Sen. Chris Van Hollen vowed to work toward doubling the amount of federal grant money given to faith organizations for security, noting that both threats and acts of violence against synagogues, mosques and churches have increased during the pandemic.

The federal government, through U.S. Homeland Security’s Nonprofit Security Grant Program distributed $180 million so that places of worships and other faith-based nonprofits could build fencing, purchase surveillance cameras, hire police and train volunteers to protect those practicing their right to worship freely, Van Hollen said. Grant requests totaled $400 million, meaning that not everyone was able to purchase the security measures they thought they needed, he said.

Therefore, Van Hollen is pushing a bill that would provide $360 million in grants throughout the country. President Joe Biden supports the increase, he said.

“Number one is we all need to be united when it comes to confronting hatred and bigotry,” the Democrat from Maryland said during a press conference at Kemp Mill Synagogue in Silver Spring Friday. “As a community, we always need to stand up for each other.”

Van Hollen noted, “It is a sad sign of the times” that money must be spent on security, he said.

Stuart Weinblatt, senior rabbi at Congregation B’nai Tzedek in Potomac, said the money is needed so that houses of worship can carry out their mission to being spirituality and purpose to members and provide support for families.

“That is all we seek to do,” he said, adding that terrorists want to stop that. 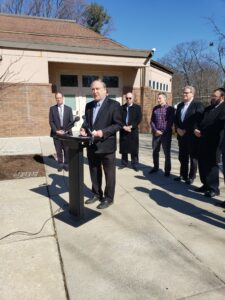 Pastor Doug Bratt, senior pastor at Silver Spring Christian Reformed Church, said it was important for him to stand with his neighboring synagogues. During covid, “We have come together to help our neighbors who are hungry.” That brought about a “deepened concern for, a love for, our neighbors,” he said, adding everyone should feel secure when worshiping.

County Executive Marc Elrich said it was sad that the government needs to spend money on security and not on funding programs. “There is something fundamentally wrong when you have to propose legislation to protect health officers” and the student member of the Montgomery County Public Schools’ Board of Education.

Elrich was referring to multiple threats received by former County Health Officer Dr. Travis Gayles and also that two people recommended for his job decided not to accept the position due to the volatile political climate. He also referred to SMOB Hana O’Looney, who was cyberbullied after she said during a school board meeting that she believed the indoor mask mandate should continue.

The county’s role is to protect residents from such abuse as well as allow people to worship safely, Elrich said. “We are obligated to do all we can to make sure nothing happens.”