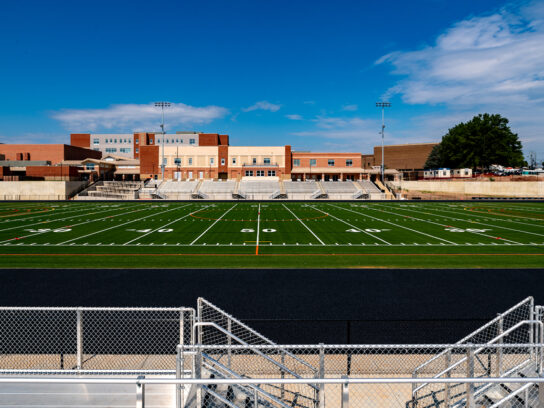 A 15-year-old student was hospitalized with non-life threatening injuries, but that was not as a result of the fighting. Seneca Valley Principal Marc Cohen wrote in an email that the student was injured trying to climb over a fence to get into the game.

The game was cut short after the third quarter. According to Montgomery County Police, no arrests were made as if Sunday but the investigation is continuing.

“I understand that there are rumors in the community about the brandishing of a weapon in one of these fights. At this time, I have no evidence to support that this happened,” Cohen wrote in the email that was addressed to the Seneca Valley High School community.

Officers did not find evidence of gunshots fired, according to a police spokesperson.

The principal thanked the 2,000 students, parents and community members from both teams “who exhibited great sportsmanship and contributed to a friendly, yet competitive fan experience.”

Montgomery County Police went to the game and removed those involved in the fighting, according to the letter.

“The partnership between each of us is critical in the development of this comprehensive plan,” the principal noted. He urged parents and guardians to speak to their students  “and to continue to reinforce that fighting is never the right answer.”

Please click the link below to read an open letter from Dr. Cohen on recent events at SVHS. @SenecaValleyHS https://t.co/D9KGKOsW7W