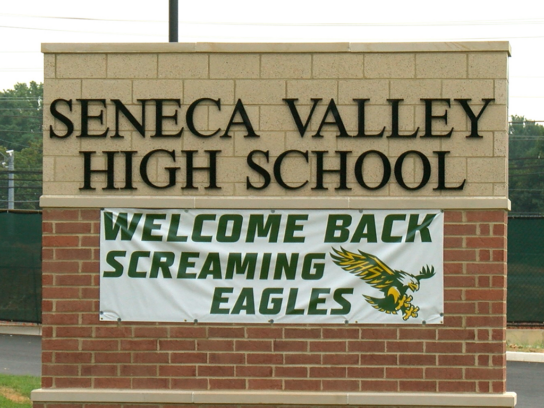 In light of fights during a recent football game and two recent shelter in place events at Seneca Valley High School in Germantown, Principal Marc Cohen held a one-hour informational meeting that mostly included answers to questions from concerned parents.

Throughout the meeting, Cohen stressed that the problems concern a small group of female students and lots of rumors spread on social media. He urged parents and guardians to speak with their children and said the school and its counselors are available to them. He called for students and families to become part of the solution.

“There are a group of students, primarily young ladies” who are fighting off campus, but the events have spread to the school itself, Cohen noted.

As for rumors about weapons and shots fired, MCP Commander Edward Pallas said those incidents occurred nearby “in the neighborhood” and are not related to the school. One person has been arrested, and police are seeking others, he said.

“I am as sure as I can be that it is not gang-related, and it is not tied in any way to the school,” Pallas told those on the Zoom call. The only connection is that it took place “in close proximity” to the school, he said.

“This has been a very difficult week for everybody in our community. It certainly has been for me,” Cohen said. “Our staff, we have been leaning on each other.”

He urged everyone to remember that a “very small number of students created such havoc for so many people.” He and the school counselors have met with some of those students, he noted.

Cohen noted it was less than one percent of the 2,100 member student body who are involved in the fighting.

The principal asked parents to remind their children that they are not permitted to leave the campus for lunch and also are not allowed to prop open doors so parents or Door Dash can deliver food.

“We do not have an open lunch,” he said, attributing that to the busy roads nearby and the risk of accidents.

Some parents questioned if the school wasn’t safer when student resource officers (SRO) were permitted inside the building. This policy was discontinued this school year when County Executive Marc Elrich pulled its funding from the budget.

MCP Captain Stacey Flynn reassured parents that there are community engagement police officers assigned as a team to all schools in the Germantown area. “They are able to respond whenever they are needed.”

There are about 200 cameras inside and outside the high school, and a six-member security team who mentor, support, counsel and are the “eyes and ears of the school,” Cohen said.