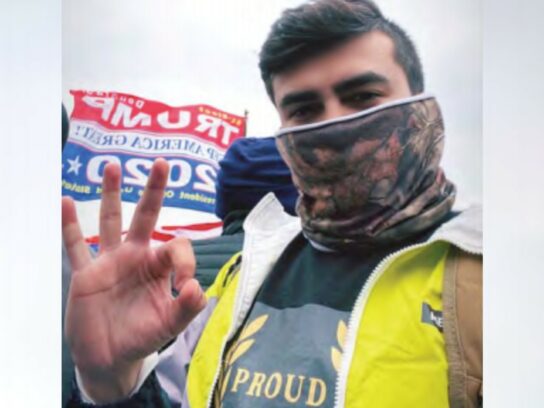 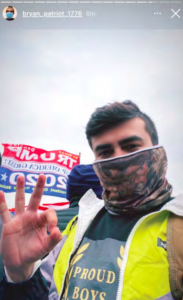 Via FBI: This photo allegedly shows Betancur flashing the “ok” hand gesture, which has been used by white supremacist groups.

A “self-professed white supremacist” from Silver Spring was arrested Sunday on charges related to the Jan. 6 storming of the Capitol.

Bryan Betancur faces charges including entering restricted grounds and unlawful activities on Capitol grounds, according to an affidavit from an FBI special agent. Betancur was on probation following a fourth-degree burglary offense. He received permission from his probation office to go to Washington, D.C. on Jan. 6 so he could distribute Bibles with a group called “Gideon International,” the affidavit says. He previously received permission to go to the district with the group. Under his probation terms, Betancur wore a GPS device, which shows he went toward the White House Ellipse before moving to the west-front area of the Capitol, the affidavit says. The agent also believes Betancur was inside the Capitol Police barricade and inside restricted areas based on photos and videos. 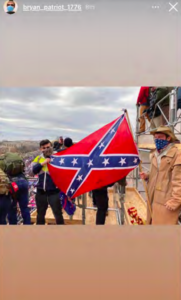 Via FBI: Betancur is believed to be standing on the left.

The court filing includes two screenshots from an Instagram account that the FBI believes belongs to Betancur. One photo shows two people standing on scaffolding on the western side of the Capitol while holding a Confederate flag. The agent believes the person on the left to be Betancur, and said an FBI Task Force Officer agreed. Another photo allegedly shows Betancur flashing the “ok” hand gesture, which has been used by white supremacist groups, and which the FBI says Betancur has shown in other photos.

On Wednesday, Jan. 6, the Capitol building went under lockdown when supporters of former-President Donald Trump charged into the building as lawmakers were working to certify President Joe Biden’s win. Five people died, including one Capitol Police officer.

Betancur lived in Silver Spring with his mother after being released from custody in November following a probation violation. The affidavit says Betancur was previously convicted for fourth-degree burglary and repeatedly violated probation and parole.

Betancur told law enforcement that he belongs to several white supremacist organizations and has made comments about conducting a school shooting and wanting to run people over with a car at a church, according to the affidavit. Betancur has since said he changed his mind about wanting to hurt people, according to the court filing. After his release from custody following his burglary offense, the FBI agent said Betancur continued to participate in online “racially motivated violent extremist groups” and discussed his desire to be a “lone wolf killer” more often.