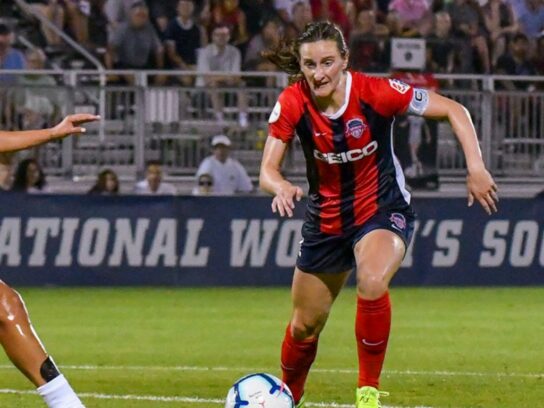 Washington Spirit midfielder and captain Andi Sullivan is out for the remainder of the 2020 National Women’s Soccer League Challenge Cup. The team announced in a press release that an MRI revealed a torn meniscus in her left knee.

The U.S. Women’s National team member suffered the injury during the second half of the Spirit’s game against the Houston Dash on Sunday. Sullivan’s season is cut short after starting all four games the Spirit have played in 2020.

“I’m obviously disappointed to not be out there playing, but I’m excited to watch the rest of the tournament and I’m hoping to see my team win it all in the end,” Sullivan said in the team’s statement.

Sullivan, who was raised in Virginia and played club soccer for Bethesda Soccer Club, is planning on returning to Washington D.C. for arthroscopic knee surgery on Thursday. Her recovery is expected to last between 3-6 months.

Spirit head coach Richie Burke also weighed in on Sullivan’s injury, sounding optimistic that she will make a speedy recovery.

“The team is rallying around our captain and incredible leader, and we are now highly motivated to play extra hard in her honor,” he added.

The Spirit have gone 2-1-1 in their first four matches, but will now face a difficult road ahead without their team captain.