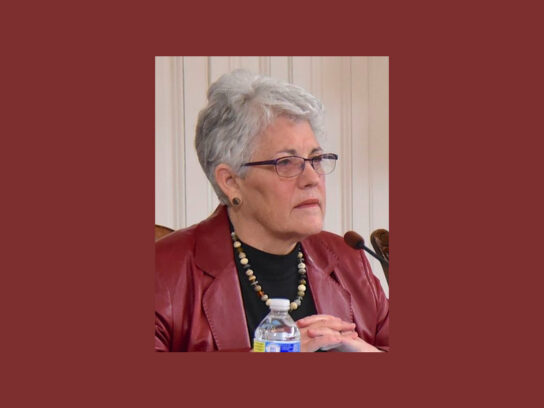 Maryland State Treasurer Nancy Kopp announced in a press release her plans to retire by the end of 2021.

A public servant for five decades, Kopp represented Bethesda area residents in the House of Delegates between 1975 and 2002. She was sworn in as State Treasurer on Feb. 14, 2002 — becoming the second woman in state history to hold the title.

“Nancy Kopp leaves an exceptional and enduring legacy of remarkable public leadership and will go down in history as one of Maryland’s most accomplished women,” County Councilmember Andrew Friedson wrote in a Twitter thread Monday.

For nearly a half century in public life, @Nancy_Kopp has embodied the true essence of servant leadership and shown the very best of what politics could and should be, especially when our politics is so often dominated by those who exacerbate problems rather than solving them. 1/

During her six terms as State Treasurer, Kopp was responsible for managing State finances and serving on several boards, commissions and committees. As one-third of the three-member Board of Public Works, Kopp worked alongside Gov. Larry Hogan and Comptroller Peter Franchot to oversee projects, contracts and State assets.

“It is difficult to imagine chairing a Board of Public Works meeting without Nancy Kopp,” Hogan wrote in a statement Monday. “With the second-longest tenure of any treasurer in state history, Nancy will leave an incredible legacy of strong financial stewardship, which has helped assure our coveted AAA bond rating year after year.”

Kopp was also a staunch environmentalist, serving on both the Maryland Climate Change Commission and the Maryland Environmental Service Board of Directors. Her opposition to Hogan’s 2019 plan to construct toll lanes on I-270 and I-495 frustrated her colleagues on the Board of Public Works, but garnered praise from local activists.

“Nancy Kopp has served the State of Maryland and Montgomery County with grace and honesty, while remaining true to her convictions and always standing up to powerful interests on behalf of the voiceless,” County Executive Marc Elrich wrote in a statement Monday.

📃 Please read my statement on the retirement of a great friend and leader for @MontgomeryCoMD and the State of Maryland. pic.twitter.com/9UiKZVAgi4

In accordance with State law, Senate President Bill Ferguson and House Speaker Adrienne Jones will begin the process of appointing a committee to review candidates for the opening in the coming weeks.

“Serving as Maryland’s Treasurer has been a great privilege, as well as a terrific challenge,” Kopp said in the press release. “I have cherished the opportunity to serve and believe that, working together, we have made a real contribution to the benefit of our state and fellow citizens. Maryland is strong; a model of good, prudent fiscal management and investment.”