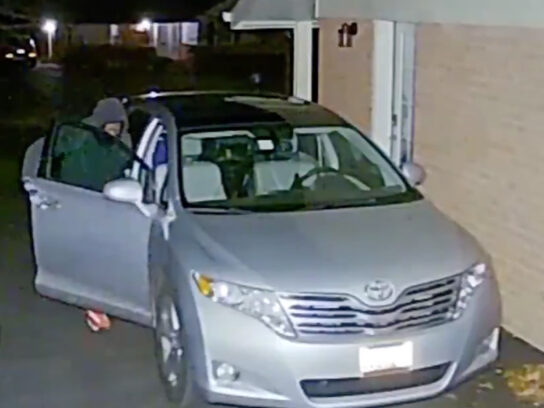 Montgomery County Police Department is investigating a vehicle theft that occurred in the Potomac area.

Detectives from the Rockville District Patrol Investigations Unit have released home surveillance footage showing a man entering a car parked on the 12000 block of Coldstream Drive. Police are asking for the public’s help in identifying the man.

The incident occurred on Jan. 7 at around 3 a.m., according to police. The man stole items from the car and then left the area, police say.

Police say they’ve been investigating several thefts in the Rockville area since early January that have occurred in residential neighborhoods around Falls Road, Tuckerman Lane, and Montrose Road. Because thefts from unlocked vehicles are a frequent crime in Montgomery County, police are urging residents to remove valuables from their vehicles and make sure doors are locked.

Anyone with information about the man in the video should call the Rockville District Patrol Investigations Unit at 240-773-6070. Anyone who wishes to remain anonymous and be eligible for a $10,000 reward can call the Crime Solvers of Montgomery County at 1-866-411-8477.