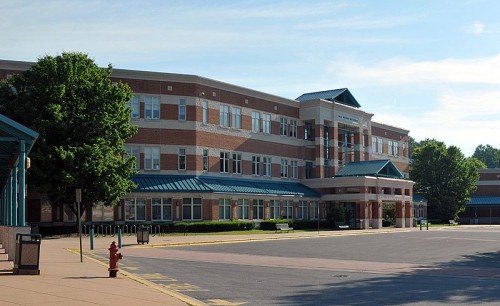 Three teenagers were charged in connection with spray painting a noose and a racial slur at Walt Whitman High School on June 13. Two of those involved are juveniles.

Officers from the 2nd District of the Montgomery County Department of Police charged a 17-year-old male juvenile and 18-year-old Jake Foster Hoffman, of the 8700 block of Grant Street in Bethesda, with the racially themed vandalism.

Another 17-year-old was charged with conspiracy.

All three of the suspects are Montgomery County residents.

According to MCPD, on Saturday, June 13 at 9:30 a.m., a 2nd District officer on patrol was flagged down by a resident who reported that racially-themed words and an image had been spray painted on property at the high school on 7100 Whittier Boulevard in Bethesda.

The officers investigated and found that a noose along with a racial slur had been spray painted on a utility shed near the front entrance of the school. Also, there was an additional racial slur spray painted on the pavement in front of the storage shed, according to police.

On June 14, one of the juvenile male suspects and Hoffman, along with their parents, entered the 2nd District station to speak with police.

According to police, the juvenile “took full responsibility.” The juvenile “stated that he committed this racially-themed
vandalism because he thought it would be fun to have something make the news given the current events occurring in the United States.”

According to police, the juvenile and Hoffman “stated that they felt regret soon after the vandalism and that they wanted to turn themselves in.”

A similar racially-themed vandalism occurred at Whitman on March 1. Officers realized the language used and the drawings were similar. Following an interview, the first juvenile admitted to committing the March 1 vandalism as well as the current one.

The first 17-year-old male was charged as a juvenile with two counts of destruction of property and released to the custody of his parent.

The second 17-year-old male was charged as a juvenile with conspiracy to commit destruction of property. He was released to the custody of a parent.

Hoffman was charged via District Court Summons with conspiracy to commit destruction of property. According to court records, his race was identified as White, Caucasian, Asiatic Indian or Arab.

Police did not release the names of the juveniles or the photographs because of their age. Hoffman’s photo was not made available, because he was charged through a District Court summons.