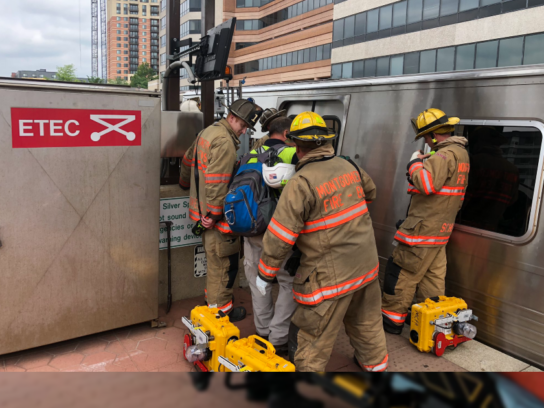 A train derailed at the Silver Spring Metro Station on Tuesday shortly after 11:30 a.m. First responders say it appears that about two rail-cars slightly slipped off the track at the station platform.

Montgomery County Fire and Rescue Service spokesperson Pete Piringer says the train was heading outbound on the Red Line, and one person had to be evacuated due to a jammed door. However, passengers in other rail-cars were safely evacuated, and there were no serious injuries reported.

WMATA and MCFRS units were among the many responders on the scene. Metro offiials say Red Line service is currently suspended in both directions between Takoma & Wheaton due to the derailment. Metrobus routes S2 & S4 are available as an alternative. As of 12:30 p.m., Georgia Avenue and Colesville Road near East-West Highway are closed, according to MCRFS officials. This story is developing.

Red Line Delay: Expect delays in both directions due to a derailment outside Silver Spring.

MyMCMedia was on the scene.