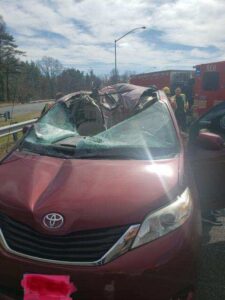 Two adults were injured on the Beltway Tuesday when a loose truck tire hit a minivan, according to Montgomery County Fire and Rescue Service (MCFRS) Chief Spokesperson Pete Piringer.

The accident occurred close to 1 p.m. Tuesday on the inner loop ramp at Cabin John Parkway near River Road, Piringer wrote on Twitter. A tire came loose from a moving box truck. It jumped over a wall and bounced across several lanes before striking a minivan going in the opposite direction. The windshield and roof were demolished by the “runaway” tire, Piringer said.

The victims were taken to a hospital with non-life-threatening injuries.

ICYMI (~1p 3/8) beltway near River Road, a tire came loose from a moving truck, bounced across several lanes of the beltway and struck a minivan traveling in the opposite direction (demolishing the windshield & roof), @MCFRS_EMIHS transported 2 adults, NLT injuries https://t.co/Qkvg8MtDiU pic.twitter.com/amSdf6Avg8