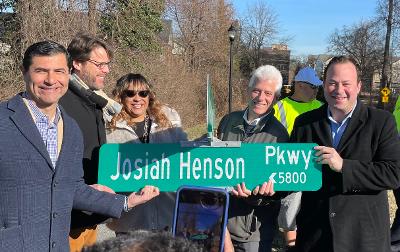 The County Planning Board officially renamed Montrose Parkway for Josiah Henson. Friday morning. Henson worked as a slave on the Riley plantation in what is now North Bethesda until 1830. After he escaped he led 118 fellow slaves to freedom on the Underground Railroad.

Henson eventually settled in Canada and traveled abroad telling his story. His life inspired Harriet Beecher Stowe’s Uncle Tom’s Cabin. The novel was the best-selling book of the last half of the 19th century. It is often credited with fueling the abolitionist movement before the Civil War.

Josiah Henson Parkway runs right through the property once known as the Riley plantation. The property is also home to the Josiah Henson Museum and Park. The Planning Board hopes the newly named parkway will attract more visitors to the museum and park.