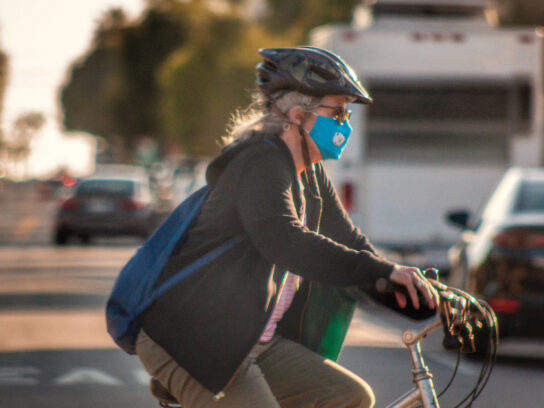 On about Dec. 17, the pilot program that provided bike lanes on both sides of University Boulevard between Amherst and Arcola avenues in Silver Spring is expected to end and the white barriers removed.

However the Maryland Department of Transportation’s State Highway Administration has yet to decide if those bike lanes will become permanent.

Residents have until Dec. 17 to respond to a survey on the possible continuation of the program.

For the past six months, one travel lane in each direction of University Boulevard was designated for bicycles. Flexible vertical delineators separated the bike and motor vehicle lanes.

That reduced the vehicle lanes down from three to two on both sides of the boulevard, which is also known as MD 193.

The temporary delineators were not designed to accommodate snow plowing, according to a spokesperson.

A public meeting is expected to be held in January, although a date has not yet been set. At that time, the state is expected to share results of the survey and data that was collected to see how frequently the lanes were used.

According to a tweet from bike enthusiast Danial Marcin of Silver Spring, there will be a holiday party in the bike lane on Dec. 12 “to give the bike lane one last hurray in its current form and hope for something better.”

Announcing the University Boulevard Bike Lane Farewell Party https://t.co/AzJq5piIbU. It's a holiday party, but in the bike lane. You're all invited. We're going to give the bike lane one last hurrah in its current form and hope for something better. Please share! Sunday, 11 AM.