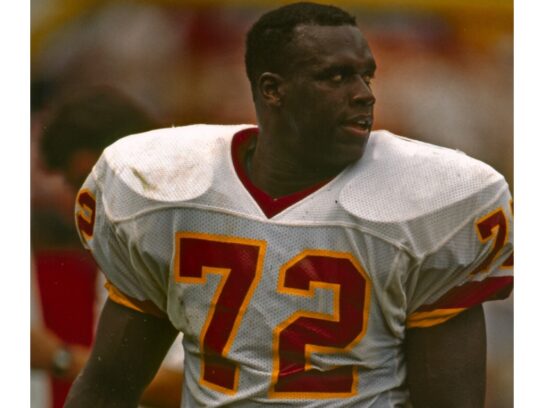 Washington Football Team legend Dexter Manley will be the Grand Marshal of a parade to kick off the 13th Annual Ice Cream Social for Charity in the Park Potomac Community on Saturday at noon.

The event, made possible through the planning and support of Park Potomac residents and businesses, supports the Interfaith Works annual backpack drive to provide more than 3,000 schoolchildren with new backpacks filled with supplies to start the school year right. Attendees at the social are encouraged to bring new backpacks to donate. Interfaith Works is a Montgomery County nonprofit serving more than 17,000 residents each year, helping them find a path to greater stability.

The Lydia & Dexter Manley Foundation is dedicated to ensuring all children in Washington, DC, have access to literacy resources and opportunities to read. In 1985, Manley made national news when he announced that he went through college without being able to read.

He told MyMCM, “That’s the reason (my wife) Lydia and I joined in and want to support this cause because it’s near to my heart. I’ve had a lot of experience with illiteracy. I didn’t have a backpack going to school. I used a sheet and a pillow case.”

Saturday’s event aligns with the missions of both organizations, which are dedicated to helping young people have the tools and opportunities they need to learn successfully.