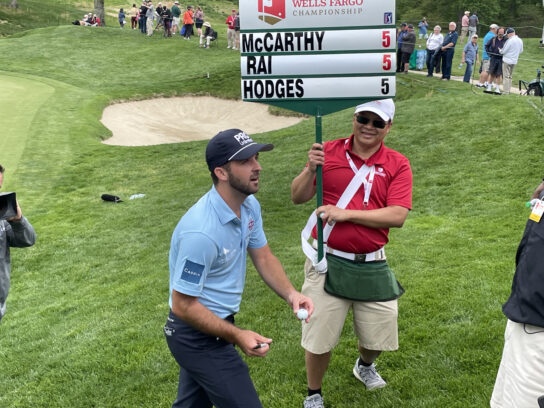 The pressure was on. Hometown favorite Denny McCarthy had a robust gallery for his first round at the Wells Fargo Championship at TPC Potomac at Avenel Farm that including his mom, dad, other family members, friends and local golf fans. Everybody was rooting for the Georgetown Prep alum to play well and McCarthy delivered with a first round 5 under par 65 which led the tournament for a time.

With the biggest gallery of his life following him, hometown favorite @_DennyMcCarthy led the @wellsfargogolf for a time Thursday finishing with a 5 under par 65, 2 shots back of lead. "I feel really comfortable. It was just a great day."
(Photo: @photoloaf for @mymcmedia) pic.twitter.com/LlbS2krSc4

Jason Day ended the day atop the leaderboard. The 2016 PGA championship winner is a former number one ranked player in the world but had struggled to find his form the last couple of years. Thursday, he played with confidence that resembled his peak form.

“Yeah, I am encouraged. I think it’s a good step in the right direction. I obviously, I’ve got to give myself a pat on the back because I played some nice golf today, but we’ve got three more days after this and I think the main goal is to try and focus and get yourself in a position where you can win. Yeah, good positive stuff today. Get back, recover and try and get into tomorrow’s round.”

Rory McIlroy, ranked 7th in the world, flirted with the lead before settling for a 3 under par 67 which left him 4 shots behind Day. Rory McIroy was one of 21 golfers to shoot 67 on the par 70 course. McIlroy is four shots back but he knows he could have had a lower score.

Other notables in contention are Rickie Fowler and Stewart Cink at 4 under and Sergio Garcia at 3 under.

Howard University’s Gregory Odom, Jr, who is playing on a sponsor’s exemption, got a rousing ovation at the first tee.

Rain is expected on Friday and Saturday.