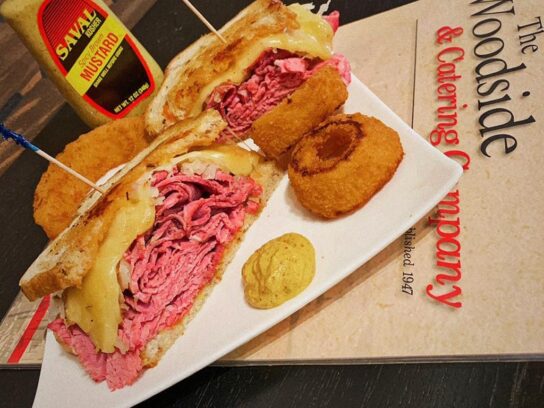 At least three employees of the recently-shuttered Woodside Deli in Rockville took to Facebook to state their disappointment on how the closing was handled.

The deli on Washington Street, known for its pickle bar, opened in 2010, but the restaurant’s Silver Spring location opened in 1947.

According to employee Natalie Faith, the staff was not notified of the impending closure, but instead “were sent a text to come get their final paychecks.” She noted on Facebook that the staff “gave up so much of their lives to that place (even having to pay full price for the mistakes if they put an order incorrectly.)”

Employee Brandei Petrov posted on Facebook, “I’m disappointed that nowhere in their announcement of closure, did they even bother to thank the staff who they left unemployed when they gave them no notice.” She also noted, “Woodside effectively left the staff high and dry.”

MyMCM was not able to reach owner Sharon Elzarat, for comment. The restaurant phones are no longer working.

In announcing to their dinners of the closing on Facebook, the owners wrote, “When the pandemic began, Woodside like many other restaurants, was hit hard with countless obstacles…Although the pandemic is no longer what it once was, many of the impacts have since lingered.”

☎️Call Woodside today to book your Pickle Bar 🥒 for your next event. Bring these Barrels of pickles to your next event…Bar Mitzvah, BBQ, Office Party you name we can bring it. Pick your choice of pickles—Half… https://t.co/YjRyE3ZJ1N

Supply chain issues, drastic price increases for supplies, rent hikes and staffing shortages were all factors in the decision to close, according to the post.

Petrov spoke with MyMCM about her eight years working at Woodside Deli, beginning on wait staff and eventually becoming a manager. She spoke of a true camaraderie with her coworkers and regular customers who felt like family.

But the owner and assistant often made the job hard to keep, she said. They berated staff for any and all mistakes and didn’t appreciate any extra effort. Petrov stayed late at times for customers still at their tables around closing time or to finish filling a catering order. She painted a mural by the entrance. She even worked 32 days straight at one point.

She said things really started going downhill when she called out sick with a fever, during the times of COVID-19 but before testing was so common, she said. They told her no one was available to cover and she had to work, Petrov recalled.

“I just kept thinking I am going to lose my job. I’ve got to come in,” she said. COVID hit her hard, and she was hospitalized. When she finally felt ready to return abut three weeks later, management had reduced her schedule from full time to two days a week, she said. At the time, she needed the job to pay rent and hospital bills.

She had another job but continued working part time at the deli.

When she went to pick up her final pay, the Rockville resident saw that written on her paycheck was the message – by signing this, you acknowledge you will receive no further pay. She chose to sign anyway but is gathering copies of her schedule in hopes of receiving overtime pay she believes is due her.

A GoFund Me has been set up to help the staff. According to that page, the front of house staff received a text July 29 to come pick up their final paychecks. “While the owner and his assistant made plans to shut down the restaurant, they were convincing the staff that the business would staff open. They lied about bringing new management, they launched a verbal assault on one of the manager for expressing wanting to quit, insisting that she has to give them notice, and they made excuses for why certain equipment was being moved around.”

It also states on the Go Fund Me page, “Many of the long time employees, at one point or another, have experienced being screamed at, working over 14 days in a row, working in unbearable heat, getting hurt because of faulty equipment, and being unpaid for overtime.”

The staff was not offered any severance at the end, “not even any of the frozen food,” according to the Go Fund Me page.