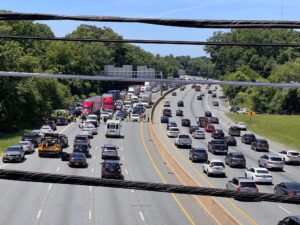 14 people were arrested after all lanes on the I-495 beltway inner loop near the Colesville Road exit in Silver Spring were blocked Monday due to a climate protest.

According to State Police, charges include disturbing peace/hinder passage and failure to obey a reasonable/lawful order. Four of 13 protestors arrested were also charged with resisting arrest. One counter-protestor was charged with second-degree assault and resisting arrest, police said.

According to police, dispersal orders were verbally given to move to the shoulder of the road. Those that did not comply were subject to arrest due to public safety issues.

Police said all lanes were open at 1:45 p.m Monday.