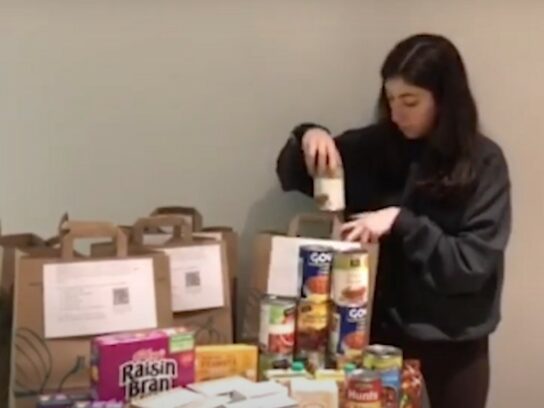 Bethesda-Chevy Chase High School senior Lilly Behbehani has been using her time at home to give back to her school community by setting up food donations for families and organizing a virtual prom for students.

After first hearing about the spread of coronavirus and the possibility of schools shutting down, Behbehani became concerned about the families who would no longer have access to food through Montgomery County’s Public Schools. As a result, she decided to create a food drive with the help of fellow students and teacher David Lopilato, to distribute food to families in need.

“On our student newspaper website I created a section dedicated to signing up for food. On the form you say your name, where you live, your phone number and a time for the food to be dropped off,” said Behbehani.

Right away she received a great response from the community and many donations. A local organization called Urban Beat even donated potted vegetables for families to sign up for if they want to make their own food at home.

“Our main goal is to distribute the food to families who have aged out of Montgomery County’s public system because they won’t give food to students who are over the age of 18,” said Behbehani. “Not knowing how your parents are going to be getting food during this time is extremely scary, so we are going to be focusing on that side of it.”

Along with the help of Lopilato, about 12 families have received the food donations so far.

“We are trying to advertise beyond the B-CC cluster but it’s harder since I only have access to the B-CC group, but we are hopefully going to get there soon,” said Behbehani.

Behbehani is no longer accepting food donations due to the large amount of food they already have. Although, her and Lopilato are still in the midst of distributing the food to local families.

After successfully coordinating the food drive, Behbehani decided to also organize a virtual prom for MCPS students. She reached out to charities and organizations asking for their help in giving the seniors the prom that they have been looking forward to. She is even planning on having the prom live streamed on the local Montgomery County TV network.

“We are planning on having a lot of MCPS students broadcast themselves in their dresses all dressed up on to the network,” said Behbehani. “It will be a live stream with all of the different students.”

Their prom, originally scheduled for May 8, has not officially been cancelled yet, but Behbehani is planning ahead for the virtual prom in the case that it does get cancelled.

Behbehani is planning to get students involved with the prom via social media and with the help of the Student Government Associations at neighboring schools. To help add to the prom, Behbehani is also doing some celebrity outreach for students as well.

“We are trying to get some celebrities so that it is more exciting for students because standing in front of a computer may not seem as fun,” said Behbehani. “We are thinking about reaching out to some local Montgomery County artists from schools as well for the music and if they have a big following and advertise it, more people would want to show up.”

“A lot of organizations can’t have their volunteers come in so we just really hope that people can see this as just another way to interact with our community and help community members, because everyone needs to have each others back during this time,”said Behbehani.