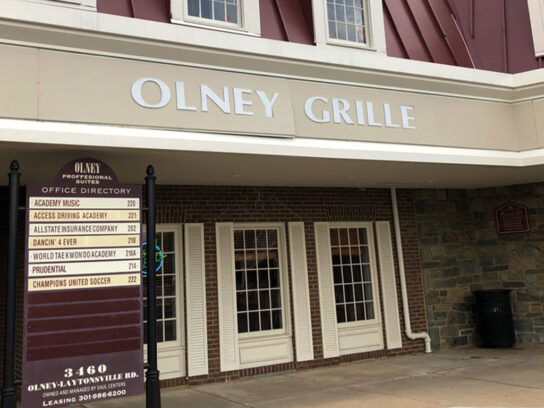 Loyal customers are lending a helping hand to the Olney Grille during this time of economic hardship.

Since Gov. Larry Hogan announced that all restaurants in Maryland would need to close except for carry-out and delivery orders, Olney Grille customers started a fundraiser for the Grille’s staff called the 100 Club. The Olney Grille posted on its Facebook about the fundraiser on Monday, saying they are “blown away” by the generosity of customers.

“During this less than ideal time, we have witnessed an outpouring of generosity and kindness from our customers on a daily basis” the Facebook post says. “We are so grateful and humbled by the love and support the community has shown us during the past month (and always). Thank you to all and we can’t wait to serve you when the dining room reopens.”

As of Thursday afternoon, Jen Voith, one of the owners of the Olney Grille, said more than 40 customers have donated to the fundraiser and its raised $4,540.

“It helps our spirits a lot,” Voith said, remarking on the customers’ generosity, in an interview with MyMCMedia.

The Olney Grille normally has 30 employees. But now that the local restaurant is not open for sit in dining, there are limited shifts available and therefore less employees are working (many by their own choice, Voith said).

With the small team currently working at the Olney Grille, most are only working between 12 to 14 hours per week, Voith said. The responsibilities for the Olney Grille’s servers, bartenders, and managers are much different since the restaurant is only open for carry out and take out—which, during normal times, would have been 15% of the sales the business brings in, Voith said. But now the Grille is relying on it for 100% of the sales.

Now, non-kitchen staff employees are dividing shifts taking orders over the phone and bringing orders outside to cars. Business is up and down, Voith said. The staff is practicing physical distancing, wearing masks, and gloves, and taking appropriate sanitary measures. Many of the customers picking up food come inside to pay, so the Olney Grille is working on encouraging customers to instead do curbside pickup.

The Olney Grille is continuing to receive support from its loyal customers and the staff plans to divide the donations from the 100 Club fundraiser among its staff.

“Just that feeling has made us so optimistic about what’s going on it’s just really helped a lot,” Voith said.

The Olney Grill has applied for the Small Business Administration’s Paycheck Protection Program, which was included in Congress’ $2 trillion economic relief bill, the CARES Act. Several news outlets reported Thursday that the White House announced that the program has run out of money and therefore the program has stopped accepting claims.

MyMCMedia asked Voith what customers can do to support local restaurants. She said anyone who had the means for additional support could avoid using delivery applications because, although these are good for physical distancing, many have an additional 30% charge to restaurants. She also suggested people pay tips in cash.

“I think people are doing what they can and we aren’t the only ones that are struggling,” Voith said.