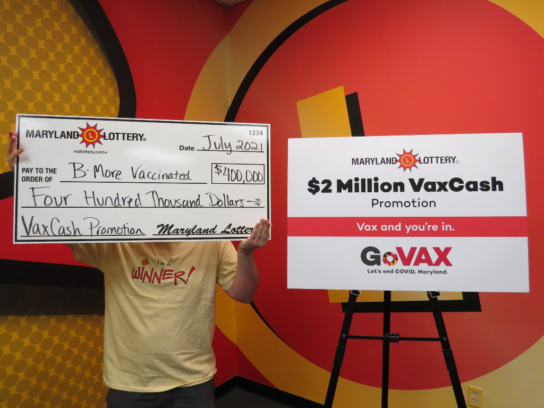 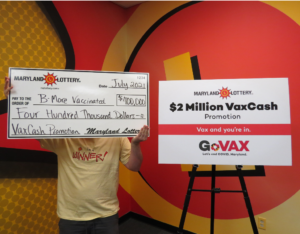 A Baltimore City resident was the big winner in the July 4 VaxCash Maryland Lottery drawing. The man was randomly selected from more than 3.2 million people to receive the $400,000 grand prize in Maryland’s $2 million lottery VaxCash Promotion.

The promotion, announced by Governor Larry Hogan on May 20, was an effort by the Maryland Lottery and the Maryland Department of Health to encourage Marylanders to get their COVID-19 vaccines. All Maryland residents 18 and older who had received a COVID-19 shot at a non-federal facility in Maryland at any time were automatically entered into daily drawings held from May 25 through July 4. Beginning with the June 27 drawing, any Maryland resident 18 or older who was vaccinated at a Veterans Affairs (VA) facility located in Maryland was also eligible.

Shortly after the drawing on Sunday, an anonymous Baltimore City man received phone calls and a text message from a phone number he did not recognize.

“At first I didn’t answer the phone, but after two phone calls and a text, I thought I should find out what was going on,” the winner said as he visited Maryland Lottery headquarters on July 6 to claim his prize.

He still didn’t really believe it, so he began his detective work and asked the representative from the Maryland Department of Health who called him to friend him on social media so he could confirm her identity.

“It took me around two days to process that this was real,” the IT professional said. “I was talking with my sister before coming to claim the prize, and she still didn’t believe it.”

The Baltimore City resident, who claimed the prize anonymously and nicknamed himself “B-More Vaccinated,” took some pictures while at Lottery headquarters to send to his sister to prove that he really did win the $400,000 prize.

While the winner said he plans to save most of the prize money, he added that he would also like to donate some to charity.

When asked why he chose to get the COVID-19 vaccine, he said it was an easy decision.