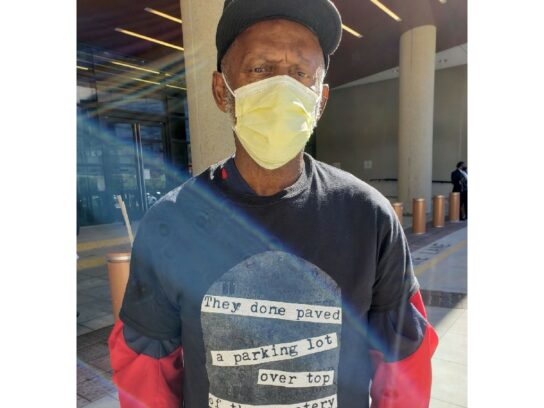 Members of the Bethesda African Cemetery Coalition held a “victory press conference” Wednesday to celebrate a court ruling that temporarily halted the sale of Westwood Tower Apartments, which has a paved parking lot atop the former Moses Cemetery.

“We are still on cloud 12, not just cloud nine. We are still rejoicing,” said Rev. Segun Adebayo, Pastor of Macedonia Baptist Church, when he  spoke in front of the courthouse in Rockville.

Montgomery County Circuit Court Judge Karla Smith issued a 51-page ruling Oct. 25 in which she granted a preliminary injunction that at least temporarily halts the sale of the apartment complex in Bethesda by the Housing Opportunities Commission to Charger Ventures LLC for $51 million.

The HOC can either appeal that decision or stop the sale on its own. The commission did not respond to an email request about what it will do.

Judge Smith ruled that the land in question contains the former Moses Cemetery, home of about 200 buried remains of African Americans, many of them former slaves, who resided on River Road.

“The court has an obligation to insure that such resting places must be respected,” Colgate said the Judge noted in her ruling.

Coalition members also want a memorial erected on the site “so we can sit down, sing to them, pray to them,” Adebayo said. He called on County Executive Marc Elrich and members of the county council to “do the right thing” and establish a memorial.

Here is some of what Coalition members said during the press conference.

During the earlier 12-hour preliminary injunction hearing, Harvey Matthews gave an emotional description of his youth where he grew up along River Road. He played in that cemetery, because Blacks were not allowed to use the public parks at that time. The Macedonia Baptist Church on River Road was, and continues to be, the center of his life. That church, “is the last thing from the Black community that is still there,” according to Matthews.

“I know there was a cemetery there,” he said, adding that he and his cousins played hide and seek and would cut across the cemetery to walk to and from school.

If anyone were to dig in that area now, Matthews testified that he believed “body parts will jump up at you like popcorn.”