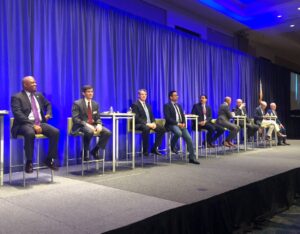 The Committee for Montgomery held its 32nd Annual Legislative Breakfast on Friday.

One forum question noted national dialogue has renewed focus on justice and systemic inequality. When asked what the most pressing disparity in Maryland is, Baker pointed to the education system. He said kids already behind are falling even further due to COVID-19. He also noted a disparity in health care. Baron cited the state’s poverty rate.  Over time, he said, low and moderate-income Marylanders have seen stagnant wages while income inequality grows. Jain said all inequities only increased with COVID-19 and looks to demand accountability in law enforcement.

King said his great-grandfather was enslaved in Gaithersburg. He wants every proposed bill from the General Assembly to include a racial equity impact statement.

Moore cited a report that found Maryland incarcerates more young Black men than any other state, with Mississippi in second place. He said these are economic disparities, too. Moore wants to focus on “work, wages and wealth.”

Perez stated people should have access to health insurance regardless of immigration status, and he hopes to connect people to jobs.

“Jobs and justice,” he said. Lashar also mentioned the state incarcerates a disproportionate number of young Black males. On his first day as governor, he said he would launch a review of all non-violent offenders in state jails to see if they can be made eligible for amnesty.

On beltway widening and toll lanes, Baker said he is not in favor of adding highway toll lanes. The state should focus on providing needed transportation, he said. Baron supports partial highway expansion but not full widening. He would want to wait to see traffic patterns as a result of partial expansion before moving forward. Gansler favors the American Legion Bridge work. He said there is not a choice between addressing mass transit or traffic, and the state can and needs to do both. Jain opposed toll lanes and said he would ensure transparency in existing contracts. King said the American Legion Bridge work is worth it but toll lane expansion is “a mistake.” He considered ideas like reversible lanes but said that ultimately, it is necessary to focus on public transit.