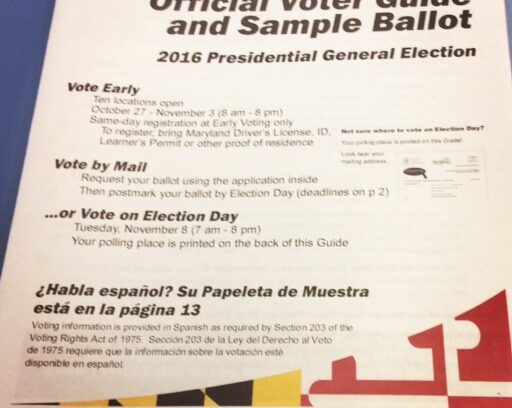 Montgomery County councilmembers are permitted to openly advocate and tweet about their preferences on the ballot questions in the November 3 election even if the results could affect their jobs if they choose to seek reelection.

Voters are being asked to decide on the future size of the county council and whether to continue to include at-large councilmembers. Election results, which would take affect at the next council election in 2021, could weigh heavily on whether some councilmembers are reelected.

“Advocating for or against a ballot question that has a direct effect on County operations is permissible government speech,” according to Sonya Healy, legislative information officer for the council.

Under the Hatch Act, civil service employees in the executive branch of the federal government, not counting the president and vice president, are prohibited from engaging in some forms of political activity.

But neither Montgomery County nor Maryland have a law like the Hatch Act, Healy said. Also, she noted that “prior litigation in the Maryland Court of Appeals established that the County may support a ballot initiative.”

Robert W. Cobb, staff director and chief counsel for the Montgomery County Ethics Commission, also cited that 2015 Fraternal Order of Police (FOP) v. Montgomery County court of appeals case to note that the councilman have the right to campaign for particular ballot questions.

It was ruled in the FOP case that the county officials were involved in efforts that “fell within the scope of their official duties.”

In Councilman Evan Glass’ October newsletter, he urged his constituents to vote for Ballot Questions A and C. Question C calls for retaining at-large seats, and Glass is an at large member of council.

Councimember Hans Riemer also is an at-large member. He recently tweeted his ballot question recommendations, also favoring A and C.