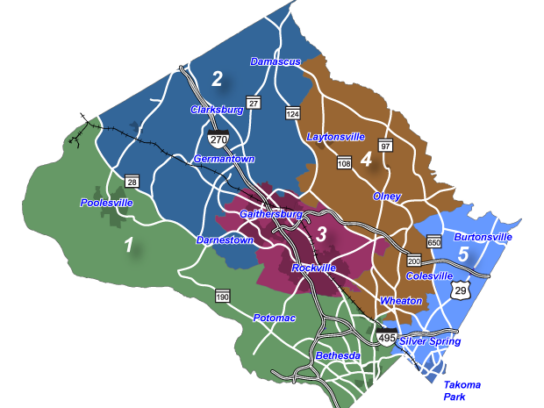 The Montgomery County Redistricting Commission will convene on Sept. 23 at 5 p.m. to begin the process of mapping new Council districts for future Council elections, according to a presentation on redistricting and the commission’s role.

The County’s Constitution stipulates that district lines be redrawn every 10 years based on the findings of the decennial census. The last redistricting was approved in 2011.

2020 census data was made available by the State to the Commission on Sept. 15. According to the U.S. Census Bureau, the population of Montgomery County increased by 90,284 between 2010 and 2020. Consequently, the number of council districts will increase from five to seven beginning in 2022. The number of council members will increase from nine to 11, with the additional council members to represent Districts 6 and 7.

The Commission will consider several different factors when mapping the new Council districts. The Equal Protection Clause of the Fourteenth Amendment requires that legislative districts be equal in population. Montgomery County had a population of 1,062,061 in 2020, according to the U.S. Census Bureau. This means that each of the County’s seven districts will contain approximately 150,000 residents.

The Commission will also strive for compactness — minimizing physical distance between all parts of a constituency — and contiguity — ensuring that all parts of a district are connected at some point with the rest of the district.

In general, the County is becoming more diverse. However, it remains geographically segregated along racial lines. Several new minority-majority areas emerged between 2010 and 2020, mostly concentrated in southeast County and around the city of Gaithersburg. Most of upcounty, Bethesda and Potomac are still predominantly white.

The Commission hopes to avoid crossing city or town boundaries when drawing districts. It will also attempt to preserve “communities of interest” — geographical areas where residents have common political interests that do not necessarily align with the boundaries of a political subdivision.

Characteristics of communities of interest might include shared language (as seen in Wheaton, where the majority of residents speak Spanish at home as opposed to English), religion (as seen in Silver Spring, where the local Eruv Association connects the Jewish communities in Hillandale, White Oak, Woodmoor, Northwood and Kemp Mill), or ethnicity (as seen in Burtonsville, where the Washington Kali Temple acts as a cultural center for the region’s Indian population).

The Commission is requesting the public’s help in identifying communities of interest. Residents are encouraged to complete this form if they live in an area which they believe would benefit from being represented in the same district.

In October, the Commission will present draft maps for public comment. Residents will have the opportunity to testify on which communities should be represented in a single district, which communities should be in separate districts and where the boundaries between districts should lie. Meetings will be livestreamed on the Council’s Facebook page.

The Commission will report to the Council with its recommended map or maps by Nov. 15. The Council will then vote on the adoption of a final district plan.