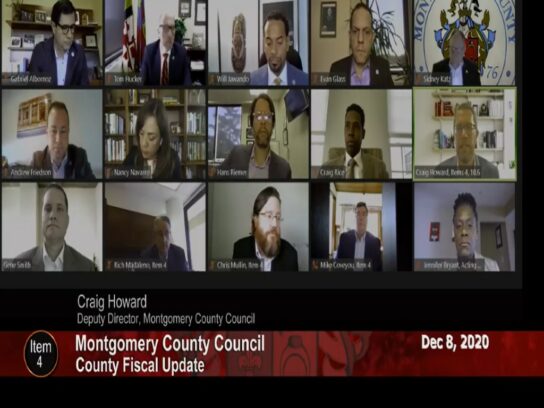 Montgomery County has collected about $100.6 million less in taxes than expected this year due to the pandemic, with half of that resulting from less income tax revenue and the rest partly due to reduced income from the hotel tax.

The income tax took “a horrible hit” and brought in about $57.5 million less than anticipated, said Michael Coveyou, director of the department of finance.

According to a presentation by the county’s fiscal team to county council members on Tuesday, the county was able to financially weather the first nine months of the pandemic, but the future financial picture is uncertain, at best.

The county doesn’t know if or when the federal government will deliver another round of allocations, and it also is not sure how much of the $200 million in reimbursements it requested from the Federal Emergency Management Agency it will receive.

Richard Madaleno, the county’s chief administrative officer, predicted that the county may only receive half of that $200 million request. He expects the county to be reimbursed for about 35% of the $45 million it paid in extra wages for front line workers.

Madaleno noted that income from hotel and energy taxes was way down and “probably will not be returning until we get to some post-vaccine normal.”

Several members on the council said they expect to incur additional expenses in 2021 to assist those hurt by the pandemic, including those who have lost their jobs or businesses and those who cannot pay their rent or groceries. Therefore, they urged the financial staff to restrict spending in other areas as much as possible immediately.

“There are very challenging days ahead,”  Councilmember Evan Glass said, noting, “We need a savings plan.”

“We are having businesses fall, and that’s continuing,” said Councilman Sidney Katz. “If we keep using our reserves, you are not going to have anything left.”

Said Councilmember Nancy Navarro, “There is no doubt our expenses are going to grow,” adding,  “There are so many pieces that are in play.”

On a positive note, the county expects to receive an additional $17 million in property tax revenue during the coming year due to voter approval of the ballot question that established a cap on the property tax rate instead of the total tax revenue the county can receive, as is the current system.