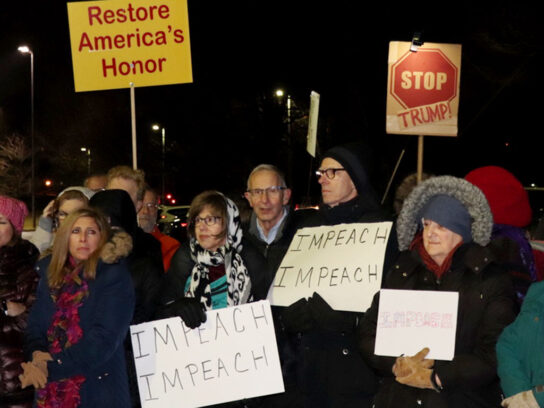 On the eve of the House of Representatives voting on whether or not to impeach President Donald Trump, dozens of people showed up at Olney Manor Recreational Park to support removing the president from office.

The rally was one of seven pro-impeachment rallies held in Maryland—and one of several others around the country—organized by the progressive group MoveOn. The rally in Olney started at 5:30 p.m. on Tuesday and featured speeches from Councilmembers Will Jawando and Evan Glass; County Executive Marc Elrich; State Del. Eric Luedtke (D-District 14); Activist Jorge Benitez-Perez; and Julian Haffner, the president of the Association of Black Democrats of Montgomery County.

Elrich spoke to MyMCMedia about why he chose to attend the rally.

“I think [Trump] has committed serious crimes. I think the impeachment just touches the surface of things he’s been involved in and I’d be happy to see him impeached,” said Elrich.

In addition to the rally in Olney, there was another rally in Gaithersburg that started at 6 p.m. According to a press release, the Gaithersburg rally featured the following speakers: State Dels. Julie Palakovich Carr (D-District. 17), Gabe Acevero (D-District 39); Gaithersburg Mayor Jud Ashman; Gaithersburg Council Members Mike Sesma, Laurie-Anne Sayles, and Neil Harris; as well as Suzanne Baktash from the group Blue Wave United.

Elrich at Impeachment Rally: ‘We Need to Take America Back’

At the rally in Olney, Elrich said, “The idea that people that want to build a decent and welcoming community have to fight the president of the United States is nuts.”

While speaking to people rallying for the impeachment of Trump in Olney, Glass shared a shared a story about his experience working as a CNN journalist and having to interview Trump.

Jawando on Impeachment: ‘This President is Lawless’

Jawando spoke at the impeachment rally in Olney on Tuesday evening. He said, “Regardless of what happens in the senate, we cannot let up. We have to go all the way through November of 2020, whether he’s removed or not, and we’re going to get him removed one way or the other.”