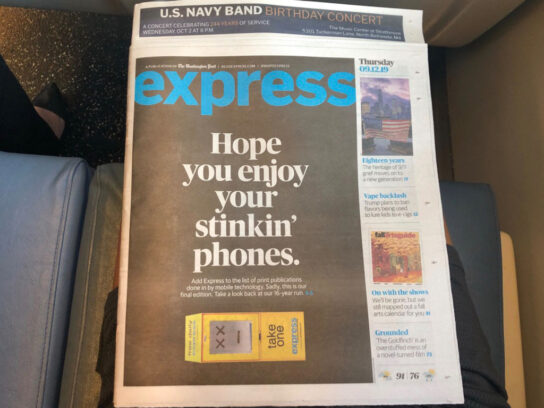 Express, commuter newspaper published by The Washington Post, shuts down after 16 years https://t.co/vqh1i9n7UZ

Express featured national and world stories, as well as more local news. It was meant to be a fast read, with a mix of stories from The Washington Post and original stories by Express staff. There are 20 Express journalists, and they will all be laid off Thursday.

The Washington Post Newspaper Guild published a statement condemning the closing and layoffs. The Guild is a union representing more than 1,000 Washington Post employees, but not Express employees. The statement said that many Express staff members are young women, and did the same jobs as other newsroom staff, but for less pay.

“They were excluded from a union contract that would have protected them only by legal and bureaucratic fictions that labeled them a different entity within our company, though Post Express and The Washington Post are both owned by Jeff Bezos, the richest person in the world,” the statement reads.

The statement also said the 20 employees losing their jobs did not find out until Wednesday, one day before the paper’s last publication.

Here are some tweets from Express employees:

Hey I really, really loved working at @WaPoExpress for five months but tomorrow’s issue will be our last. If you need an editor, particularly a sports editor, please get in touch.

Personal news: I and rest of @WaPoExpress newsroom have just been laid off and Express is closing down after ~16 years. I'm copy chief and have been at Express 3½. Looking for a new #journalism job. https://t.co/o80g21yFhh