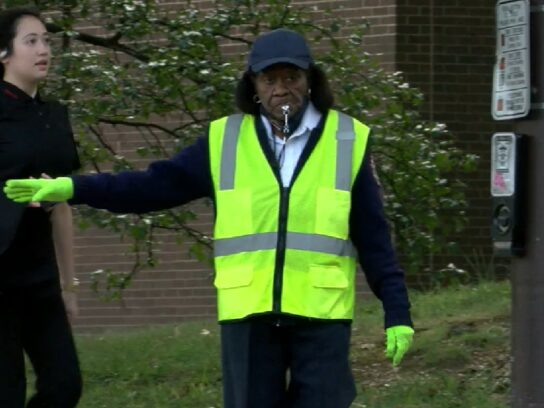 For the past 50 years, through all kinds of weather, Doris Rodgers continues to blow her whistle and escort Takoma Park students on their way to and from school.

Tuesday morning, the 80-year-old mother to four and grandmother to six, kept her eyes riveted on all four corners at Philadelphia and Maple Avenues, by the Takoma Park police station. As soon as it was safe, she blew her whistle and put her arm out to stop traffic, allowing students, their parents, bike riders, joggers and dog walkers to cross safely.

It all began when she and her husband moved to Takoma Park from North Carolina, where she had worked as a cook in a hospital and cleaned houses. She thought she’d be a stay-at-home mom, that is until she saw an ad for a school crossing guard “in the little city paper.” She filled out an application and was told to return Monday to start working. That was August 1971.

The job was a good fit. She loves the hours and the children. At first, she did three shifts but students stay in school all day now so she works two hours in the early morning and another two in the afternoon. Bad weather doesn’t bother her. “When it turns cold you just put on extra long johns and wear a heavy coat.” 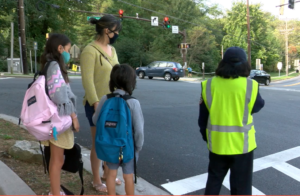 Sometimes the children she helped cross return to say hello. She guided Takoma Park Police Chief Antonio DeVaul when he was young. “He remembers me more than I remember him,” she said.

When asked if she recalled anyone else of importance, she replied that she helped cross all Takoma Park youngsters who walked to elementary or middle school.

Rodgers, the longest serving city employee, knows the first name of most children she escorts across the busy intersection, including Ben, a fifth-grader. He twirled his Rubik’s Cube and proudly declared that Rodgers has worked as a crossing guard for 18,262 days (giving her credit for working all year-round.)

When asked if she thinks about retiring, Rodgers admitted she does every year before the start of the new school year. But she keeps coming back, noting, “It makes you feel better. Every day is an adventure.”

For years, many of the children arrived at the intersection by themselves or with their fellow students. But due to the pandemic, many parents are working from home and accompanying their children to and from school, she said.

As for when she will turn in her bright yellow neon vest and gloves, Rodgers pointed up to the sky and said, “If you ask me how long I’m going to be doing this, he knows.” 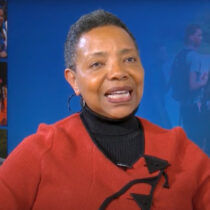