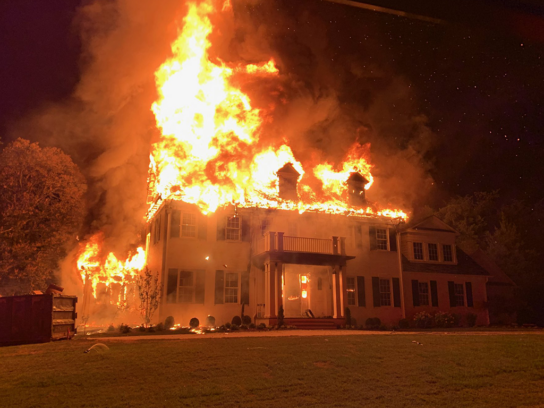 A fire at a Bethesda house—located off Bradley Boulevard on Kittery Lane and Redwood Avenue—caused more than $1.5 million in damages, according to Pete Piringer, spokesperson for Montgomery County Fire and Rescue Services.

Piringer tweeted that the fire started around 4:20 a.m. on Monday. More than 50 firefighters arrived on the scene to battle the heavy fire conditions. The house was unoccupied because it was undergoing renovations and was in its final stages of construction, Piringer tweeted.

No one was injured from the fire, Piringer tweeted. However, Piringer wrote there’s significant damage to the structure of the house, which has partially collapsed.

Piringer says that firefighters have not been able to thoroughly examine the cause of the fire due to the “structural concerns.” He noted that the house had sprinkler system inside.

A possible cause for the fire, according to Piringer, is a spontaneous combustion of rags and brushes.

Piringer tweeted that some neighbors in the area speculated that the fire was caused by a fireworks show at Bethesda County Club, which is nearby. However, Piringer says “fire investigators have all but ruled this out as a cause of the fire.”