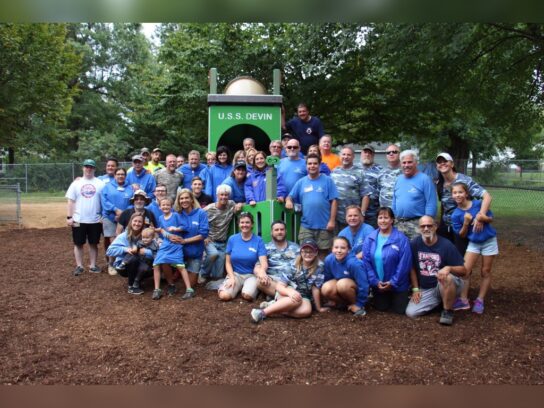 The Gemmell Family Playground officially opened to the public on Sunday. This new tot lot play area at Griffith Park, adjacent to Gaithersburg City Hall, was created in memory of Marie, Cole and Devin Gemmell, who tragically died when a private plane crashed into their home in 2014.

From tragedy to pure joy!! Kids run onto a new playground in Gaithersburg, built to celebrate the life of Marie Gemmell and her children Cole & Devin. They were killed after a plane crashed into their home in 2014 @fox5dc pic.twitter.com/5rKQ7lcmPZ

Marie’s widower Ken and daughter Arabelle helped design the park with the Where Angels Play Foundation, an organization that helps build playgrounds in honor of lost loved ones. The project, worked on exclusively by volunteers known as “Angels Army”, was completed in just three days and is highlighted by individually dedicated playsets for each member of the Gemmell family that was lost.

A tugboat for Devin, a sports themed plaque for Cole, and a nod to theatre for Marie. The Gemmell Family Playground at Griffith Park celebrates their lives and welcomes all children to play. pic.twitter.com/kRDLAS3aJ9

From donations and sponsorships, Gemmell and Where Angels Play raised $80,000 in a year and a half to fund the building of the playground which is catered to kids ages 2 to 5, around the ages of the two Gemmell children that were lost.