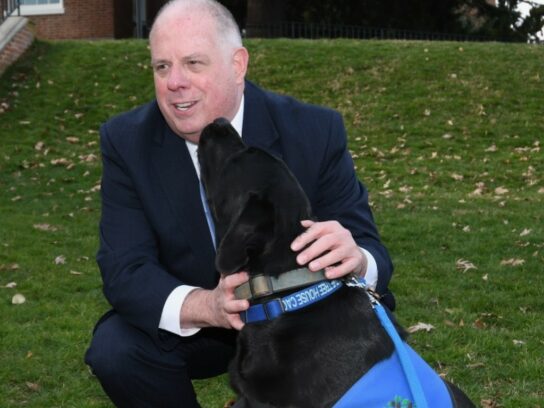 Gov. Larry Hogan is supporting legislation to provide children testifying in Maryland courts with therapy dogs. On Tuesday, Hogan hosted over a dozen therapy dogs at the Maryland State House as he showed his support for the legislation.

The bills’ primary sponsors, Sen. Bryan Simonaire and Del. Michael Malone, attended the event. Bills HB311/SB101 are going to establish a program that will provide a therapy dog to a child witness in any circuit court proceeding in Maryland.

Service animals can be comforting for children who must describe traumatic experiences in court, according to the governor’s office. In addition, pilot programs have reportedly been successful in Anne Arundel and Harford County Courts.

“I am proud to support the Court Dogs and Child Witnesses Program bill, which has seen incredible bipartisan support in the House and the Senate,” said Hogan. “This innovative approach to supporting child witnesses will provide comfort to vulnerable Marylanders when they need it most.”

The Maryland Children’s Alliance and Caring Canines were the two organizations present at the event. Hogan also presented each organization with an official governor’s citation, according to The Office of the Governor.

I was pleased to welcome over a dozen therapy dogs and handlers to the State House to express my strong support for bipartisan legislation to provide therapy dogs for children testifying in Maryland courts: pic.twitter.com/fqPPc5Sbi0