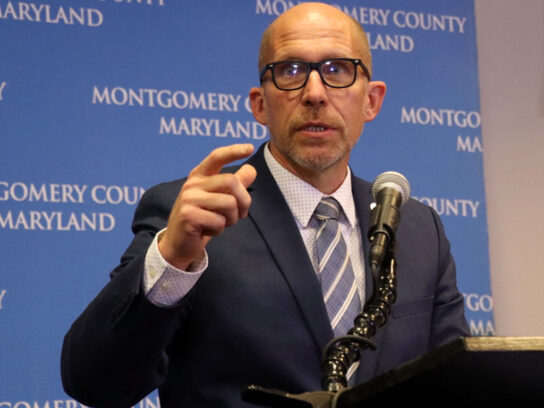 Montgomery County Councilmember Tom Hucker wants the Maryland General Assembly to pass a bill that would install road cameras to film and catch distracted drivers in the county.

MC 24-20 would let the county put “distracted driving automated monitoring systems” on highways, and the systems would be run through the Montgomery County Police Department, the same way red light cameras do, Sarah Morninginstar of the county’s Office of Intergovernmental Relations explained at a county council hearing on Dec. 2. 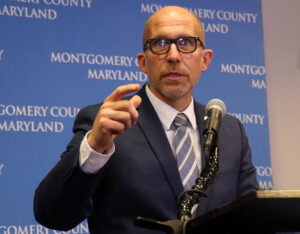 After the hearing, the council voted to take no position on the bill until members get more information about the technology involved and can then resume their debate.

Morninginstar went on to explain that offenders would be mailed a civil citation of no more than $500, or a preset amount decided by the District Court Chief Judge. The citation would be contestable in court, and offenders would not get any points on their license.

She said that the MCPD and county attorney had considerable concerns about the bill, with regard to the technology required, expanding automated enforcement, and privacy.

Morninginstar said that County Executive Marc Elrich has not reviewed the bill yet, and the council staff recommended that the councilmembers take no position on the bill.

“This doesn’t expand or change what’s legal or not legal, it’s simply one more enforcement tool,” he said.

Hucker said the cameras would be mounted and could see what drivers are doing and give a ticket, but they would still be screened by a person, like red light cameras.

“We know we have an epidemic of distracted driving, there are 38,000 crashes each year in Maryland,” Hucker said.

“I think this is a bad idea,” said Councilmember Will Jawando. He does not support the bill, and said it raised serious privacy concerns.

“We know a lot of private activity happens in the car, and what’s on that phone, whether it be you’re looking at your GPS, what else is gonna be seen?” Jawando said. “I just think there are too many issues that come up with this and the technology is not advanced far enough for us to go down this path.”

Jawando was also concerned about possible discrimination in the deployment of the monitoring systems. He thinks there is a potential for racism in regard to which communities the systems would target. He suggested that the council move against the bill, but said he would settle for no position.

“I just think this is a really dangerous path to go down,” Jawando said.

“I have concerns about this legislation… not being an attorney but understanding the importance of civil liberties and personal privacy,” Glass said. “I want to learn more from attorneys and advocacy organizations how this would be applied and what the residual effects would be.”

Glass recommended that the council take no position until they have more information on what technology the bill mandates.

Councilmember Hans Reimer was passionate about the issue of distracted driving, and believed this bill was better than no plan at all.

Reimer said he has no doubt that distracted driving is why pedestrian crashes are rising.

“Distracted driving is an epidemic,” he said.

MCPD Captain and Director of Traffic Division Thomas Didone offered his own three-part proposal. He wants to implement a pilot program that would use unmarked vehicles to see how effective the monitoring systems are, which is a part of the bill already.

Second, Didone wants to enforce a “distracted driving blitz” for a few days every month. He said it would be “all hands on deck,” police officers who don’t usually work in traffic enforcement would be doing so, and the blitz would be largely publicized in the media.

“What we have to do is let people create that deterrent effect that the cops are out there, they’re going to write tickets, it’s zero tolerance,” Didone said.

“We do average 6,000 charges a year, but that’s not changing behavior, so we have to do something more and different,” he said.

Didone’s third recommendation is to make the distracted driving offense a license-point violation, instead of the no-point violation suggested in the bill. The first violation would earn one point, the second would earn two points, and if the problem continues then the offender would eventually lose their license.

“I agree completely with Councilmember Hucker and Reimer that this is out of control and we have to do more and do better,” Didone said.

“I think clearly this has reached epidemic levels and I think this is an all hands on deck situation, I completely concur with that recommendation, Captain Didone,” Albornoz said.

He said while the bill needs to be worked out further with legality and technology aspects in mind, it allows the council and the state to have necessary conversations about distracted driving.

“Distracted driving has reached a catastrophic scenario, the challenges we face in the county seem almost insurmountable,” he said. “And any tool that we have we should be looking at, reviewing, being thoughtful.”

Friedson was also worried about privacy and said he has similar questions to Jawando and Glass.

“I think it’s premature for us to use the power of the council’s endorsement on a bill when we haven’t been able to have the opportunity to have our questions answered.” he said

Councilmember Craig Rice said the bill is very specific, and needs to be more generic so it can be flexible to whatever technology develops.

“I just don’t want us to pigeonhole ourselves into something that the technology can’t do,” he said. Rice supports a no-position stance for now, but supports the pilot program and wants to see the results before calling for a statewide initiative.