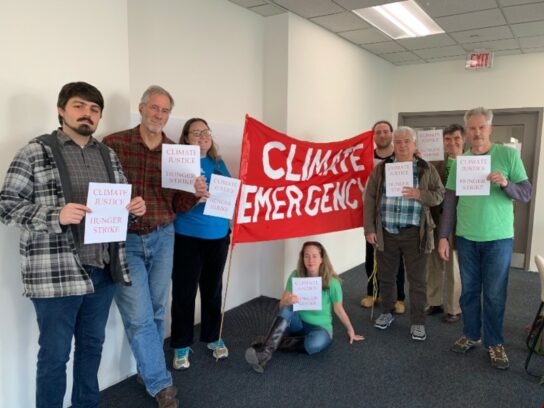 A handful of environmentalists took their protest of the Montgomery County climate policies to the County Council on Tuesday, sitting quietly during the third-floor session, after considering their next moves in the Council Office Building’s second-floor cafeteria

The group, a loose confederation of several organizations, protested outside the Executive Office Building last month. One of the members is Stephen Leas Jackson, 28, who was born and raised in Montgomery County.

Jackson, now a Thurmont resident, is undergoing a seven-day hunger strike, living only on water and spending much of the time in House Speaker Nancy Pelosi’s office in Washington, D.C.

Jackson said the group wants Pelosi to declare a climate emergency. The group also wants an hour-long meeting with Pelosi.

The County Council declared a climate emergency in December 2017.

“As far as we’re concerned, they’ve done nothing since of an emergency nature,” said Jim Driscoll, 74, of Extinction Rebellion Montgomery County.

“We don’t endorse political parties,” Driscoll said. “It’s quite clear that electing Democrats is not the answer. Because we’ve done that, that whole council sitting up there is Democratic. … You can elect them but then you have to pressure them.”

Others in the group were doing one- or two-day hunger strikes.