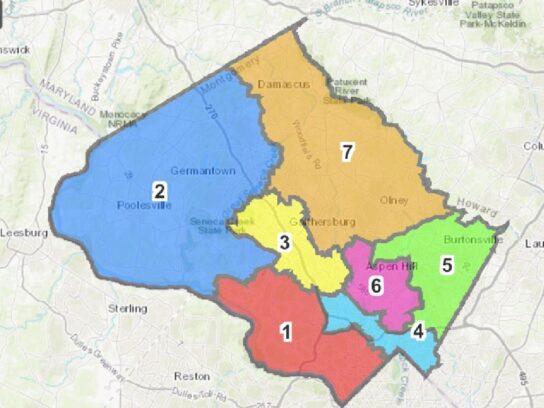 If results from early and primary day voting remain constant, the Montgomery County Council could have as many as seven women filling the 11 seats. Six of the seven district seats could be held by women as could one of four at large seats if all Democrats prevail.

The winning Democratic and Republican candidates will face off in the November general election. Democrats hold about a four to one voting edge. In the 2020 Presidential General Election, 410,936 Democrats and 105,561 Republicans were registered.

Results as of 11:37 a.m. Wednesday morning do not include some 30,000 write in and provisional ballots. Final results are not expected until mid-August.

In District 1, incumbent Andrew Friedson had no competition on either the Democratic or Republican ticket, according to the Maryland Board of Elections.

In District 2, Marilyn Balcombe registered 47% of the vote in a field of three candidates. In second place was William Roberts with 29%. If her lead holds, she will face Republican Dan Cuda in the November general election. He was unopposed. These votes include 32 of 35 precincts.

In District 3, Sidney Katz appears to have won on the Democratic ticket with 58.2% of the vote. Gaithersburg Councilmember Robert Wu is in second place with 33.2% of the vote. The winner will face Republican George Hernando in the general election. 33 of 39 precincts are included in these counts.

In a statement, Ginsburg wrote, “I am filled with gratitude and pride.” While acknowledging that there are 4,000 District 4 mail-in votes still to be counted, she wrote, “it looks like Kate Stewart will be the next District 4 Councilmember.”

The winner will face Republican Cheryl Riley in November.

District 4 results include 32 of 33 precincts.

In newly-created District 5, Kristin Mink is the top voter on the Democratic ticket with 40%, or 4,228 votes. Currently in second place is Fatmata Barrie with 2,800 votes.

The winner will face Republican Kate Woody in November. All precincts have been counted in this district.

In District 6, former Montgomery County Planning Board member Natali Fani Gonzalez appeared headed for victory on the Democratic ticket, amassing 53.5% of the vote in a field with  candidates. She earned 4,861 votes. Former Maryland Delegate Marice Morales is in second place with 1,537 votes.

The winner will face Republican Viet Doan in November.

All 33 precincts were counted in this district.

In District 7, with 43 of 44 precincts counted, Dawn Luedtke leads the Democratic ticket with 31.8% of the vote – 2,590 votes. Jacqueline Manger currently is in second place with 2,001 votes.

The Democratic winner will face Republican Harold Maldonado in November.

Thank you to the Montgomery County Board of Elections, all staff members, election judges and community volunteers who worked tirelessly to ensure that all Montgomery County residents had the opportunity to cast their votes. #ElectionDay #Gratitude @777Vote pic.twitter.com/g8seobggHR